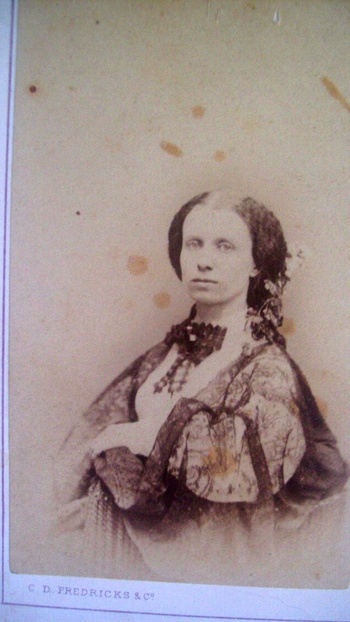 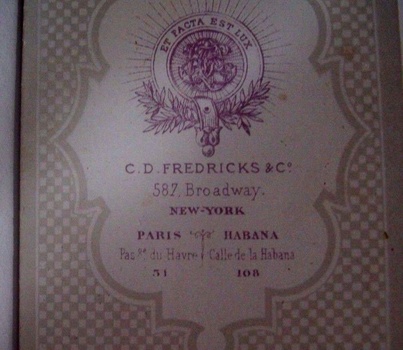 While in Paris, Talbot announced his Talbotypes and C.D. FREDRICKS brought the discovery back to America.
He later became one of the first and finest photographers using Talbot's modern paper process. His high quality images he marketed as "Specialite". The first photographs were small in size and were called cartes de visite
.B R O A D W A Y A T N I G H T . : Fredricks' Photographic Gallery, 585 and 587 Broadway, was brilliantly illuminated with colored lanterns
( Address on back of my photo is 587 Broadway). The words "Photographic Temple of Art" were formed by hundreds of lamps, covering a semicircular arch of sixty feet in curve. The windows and balconies of these magnificent Daguerrian rooms were crowded during the day with spectators, almost to the interruption of business. There is no more popular photographic gallery in New York than this, and no where are portraits obtained with greater fidelity. Fredricks' Gallery is usually resorted to for groups, especially of military, and he was called upon, on Saturday, to exercise his art on the officers of H.B.M. steam frigate Gorgon, whose portraits he took. Fredricks's time in Paris had made him realize that celebrity was constituted differently in Europe than America. Whereas statesmen, divines, generals, and capitalists dominated the lists of fame in the United States, performing artists—instrumentalists, opera singers, great tragedians held the public attention in Europe. P.T. Barnum's "Jenny Lind" tour of 1850 had suggested the potential for an American interest in performers, but its would be the John Wilkes and Edwin Booth who inserted the player into the center of public interest. Well before the tragic events of 1865, Fredricks had bet that portraits of performers would be where he could distinguish his portraiture from that of his old mentor.

While celebrity was the way to capture the eye of New York City, he knew a highly colored verisimilitude in photographic portraits amazed other people in other places. In 1857 he opened a branch of his Broadway studio in Havana, dispatching his protégé, M. Cohner, and a crew of colorists and pastel artists who trained the Cuban generation of the 1860s in the art of tinting images. Many of the people trained by Fredricks studio migrated to New York in the Cuban unrest of the 1860s, forming the backbone of the photographic coloring profession in the city in the post Civil War period.

Fredricks realized that success in photography depended upon a grasp of new ways of securing revenue. He supplied photographic templates for the illustrations in Frank Leslie's Illustrated, the first periodical that made pictures its selling point. He became the American agent of F.R. Grumel, inventor of the photo album, and from 1862 litigated anyone who infringed upon the original patent. The switch in format from the CDV to the cabinet card in 1867 brought an end to this income.

For twenty years Fredricks Studio on Broadway, opposite the Metropolitan Hotel, operated as the largest and most stylish photographic gallery in the city. It conducted a solid business plying the celebrity image trade and civic work. Camera operator John F. Main undertook most of the Magnesium Flash work documenting civic events. His published catalogues paid homage to the veteran officers of the Civil War, placing them first in the ranks of famous—Union before Confederates—then a healthy offering of Divines, before listing his Dramatic Portraits, a category twice again as large as any other.

In 1875 a fire destroyed the Broadway studio. He relocated to 770 Broadway, a four-story photographic palace, outfitted in the modern style, where he trained his son in camera art before retiring and dying in 1894.
HELP!!Is there any way of cleaning my image--Is she one of the many actress and divas he photographed? 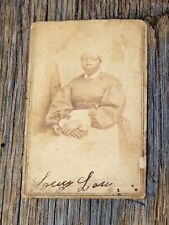 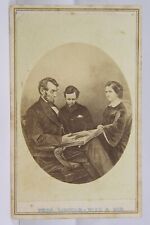