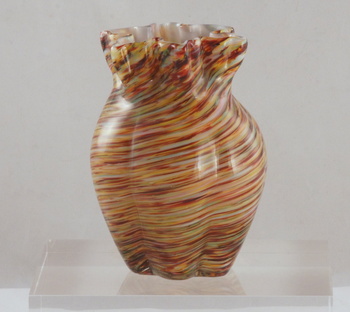 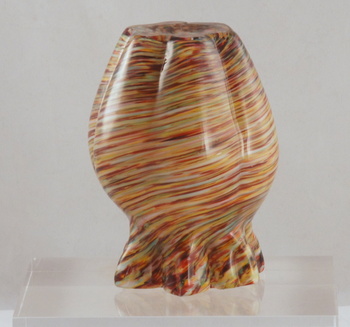 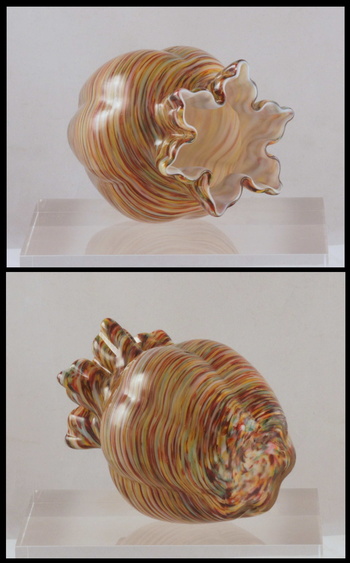 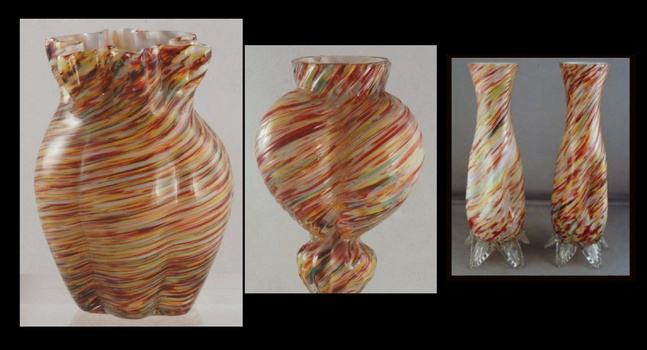 A number of years ago I found a Welz Tri-lobed Heart vase in a décor which I had not seen before. I excitedly purchased it, but on arrival I discovered that the seller was completely inept at packing glass for shipping. It was in about 20 pieces in the box.

Being a décor I had not seen before, I glued a couple of big pieces together and hung on to it as a study and reference piece. Having done this type of research for a long time, the one thing I have learned above all is that eventually, what you are looking for will present itself..... although you never know what it will be or when it will happen...... and just such an occurrence finally happened many years after the fact.

Enter my newest acquisition which I can state without hesitation is an example of Welz production in a little seen decor. In addition to the decor being confirmed, it is now also a link to a crimping style for comparison of examples, and lastly, is an example of their production with a nicely finished pontil and flat ground base around the pontil mark.

The style of this example is such that in production there is nothing for a snap tool, or gadget as they are sometimes called, to grab on to. As a result, the crimping and fire polishing of the rim after being cut from the blowing tube had to be accomplished using a standard punty resulting in the pontil mark and finishing required when they are used.

The rim of the piece exhibits a style of crimp, which although quite similar, is not exactly like the snowflake crimp I have identified. The difference appears to be that where the snowflake crimp terminates at each pattern with a squared looking end, this one ends with a little more of a rounded design. A small distinction, but a difference none the less. It is a distinction which may become important in future attempts at attributions.

The décor uses a color combination which is also found in other Welz décors, most noticeably the Harlequin Honeycomb. Some décors are just so unique that you know that when you identify them, a line of production will slowly emerge over time. I think that this décor is an example of that.

The vase stands at 4.5 inches tall, 3.5 inches in diameter at the waist, and 2.75 inches from tip to tip across the widest diameter of the crimp pattern.

The first three images show details of the vase, and the final pic shows the matching pattern and colors in the décor on my new vase, and the previously saved remnants of the Tri-lobed Heart example. It also helps to confirm a an attribution of the pair of vases shown in the image. this pair adds to the library of known shapes for Welz.

I always love it when I plan comes together, even after many years of waiting without knowing what would actually turn up...... but knowing based on past experience, that something would...... It always seems to....

They say patience is a virtue.... and when it comes to research, I can certainly attest to the truth of that old adage.