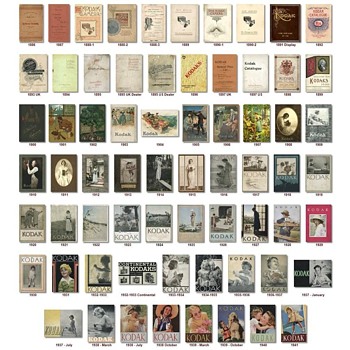 Acquiring early American cameras is a small part of my collecting activities. Research about the cameras themselves is important to understand their evolution and historical context. Understanding why cameras were made and for whom is important as well to complete the picture (so to speak).

To this end, a fellow collector and I decided that a complete electronic repository of early Kodak catalogs was needed. After 18 months, October 2011, we completed the exhaustive effort and called it the Kodak Catalogue Project. For the first time, all of the amateur catalogs (we think) as well as a number of professional, international and other catalogs so that almost all Kodak cameras from 1886 through 1941 were scanned … 67 catalogs in all. Assembling a complete set of catalogs, then scanning and processing 3908 pages, was a daunting task … but it was done.

After creating the collage of catalog covers shown here, I became fascinated with how the look changed over the years. The catalogs started as technical equipment lists and then Kodak’s marketing department kicked into high gear. What can be seen in this collage is a transition from a basic technical listing of cameras to stories and themes about how amateurs will embrace the joys of photography when using Kodak equipment. To this day, no other photographic company put this much thought into a marketing campaign at the catalog level to touch consumers’ emotions.

From 1898 - 99, covers became more ‘visual’ and each catalogue from this point forward had a specific story to tell to consumers and amateurs. Also observe how the style of the artwork changed over time. The deco years are particularly interesting because Kodak adjusted its trademark name’s font to follow the trend.

Color was an important part of the catalog’s appeal. While color was used on covers as early as 1898, it wasn’t until 1930 that color pictures of select cameras appeared within to further add appeal. This coincided with Kodak releasing several camera models that could be purchased with different colored body coverings. (Will be the subject of a future post.)

Finally, it’s interesting to see how Kodak changed its target marketing over the years. From 1900 to 1907 the theme is traveling. Women then became an important part of Kodak’s campaigns which can be seen from 1908 to 1929. Once again, Kodak shifts its focus (pun intended) and from 1930 to 1941 kids and family are the dominant messages.

All-in-all, it’s a wonderful survey of how one of the world’s great brands kept refining its marketing message over six decades!