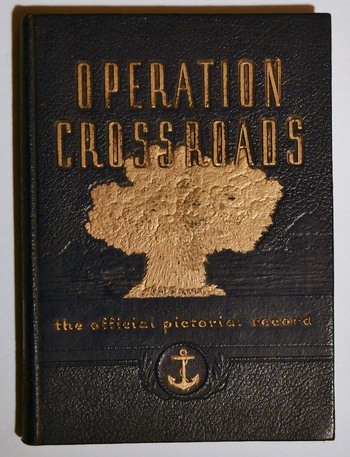 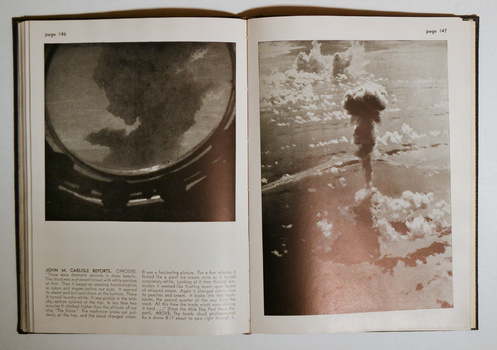 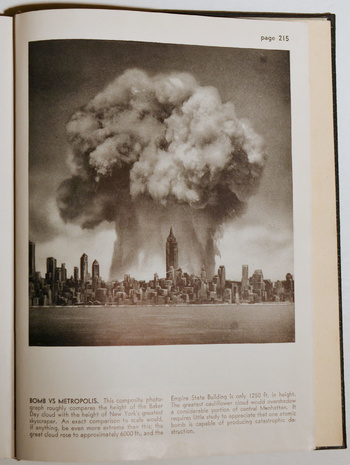 Operation Crossroads was planned as a series of three detonations. Only two were carried out. The site selected for these tests was Bikini Atoll in the Marshall Islands and the inhabitants were relocated. The stage was set with a fleet of 95 decommissioned and captured ships placed in the atoll lagoon. The first detonation (Able) was an aerial burst. Described as "self-cleaning", it sent radio-active plutonium into the stratosphere with little or no fallout. A slightly different scene on the surface, but because the drop missed the target by nearly a half mile, damage and contamination was less than expected. After a quick clean-up, the scene was reset for the second test.

The next bomb (Baker) was detonated 90 feet below the surface of the water. It was a blast unlike anything expected and there was nothing self-cleaning about it. Of the 90 ships in the 3 1/2 mile radius target array, one was vaporized, ten sank, and only nine were successfully decontaminated enough to be cut up and sold for scrap. The rest were towed to deep water and scuttled. The sodium in the seawater in the lagoon was radio-actively ionized. The Bikini Atoll is still contaminated, uninhabited and rarely visited.

The third detonation was cancelled.

This book - OPERATION CROSSROADS, The Official Pictorial Record - was released through The Office of the Historian, Joint Task Force One and published by Wm. H. Wise & C0. in 1946. Its 224 pages are loaded with pictures, including this (pic 3) grim look at the future.