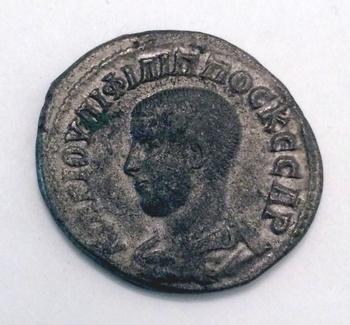 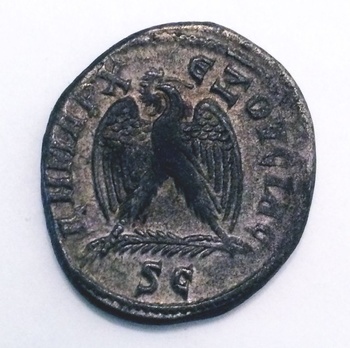 This coin originated in the turbulent 3rd century AD during the age of the "Barracks Emperors". A barracks emperor was a Roman Emperor who seized power by virtue of his command of an army. There were approximately fourteen barracks emperors in 33 years, producing an average reign of a little over two years apiece. The resulting instability and the near constant state of civil war threatened to destroy the Roman Empire from within and left it vulnerable to attack by outsiders.

Philip I was one of these. It is believed he was instrumental in the death of his predecessor, the young Gordian III. Philip rose from Praetorian Prefect (head of the Imperial guard) to emperor upon his death in 244 AD. In Roman politics at that time, those who lived by the sword frequently died by it. His reign only lasted until 249 when he was overthrown by another of the barracks emperors, Decius.

When Philip I became Augustus, he conferred the title of Caesar upon his young son, Philip II. Philip II was to die when his father fell at only age 11.

This coin was struck in the Roman Province of Syria at the Antioch mint. Antioch had produced beautiful silver tetradrachms since Greek times, but by this time the silver had become somewhat debased. This coin was struck between 244-247 AD. Obverse: Inscription: "MAR IOYLI FILIPPOC KECAR" bare-headed and draped bust of Philip II to right.
Reverse: Inscription: "DHMARX EZ OYCIAC" - Eagle standing facing, on palm branch, with spread wings, his head turned to left and holding wreath in his beak; in exergue, S C.

"Revenge is profitable, gratitude is expensive."... one is reminded why Edward Gibbon's "The History of the Decline and Fall of the Roman Empire" is still considered a classic book today.