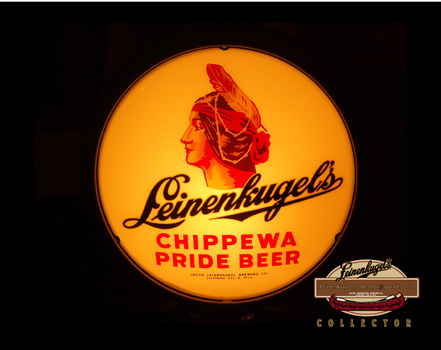 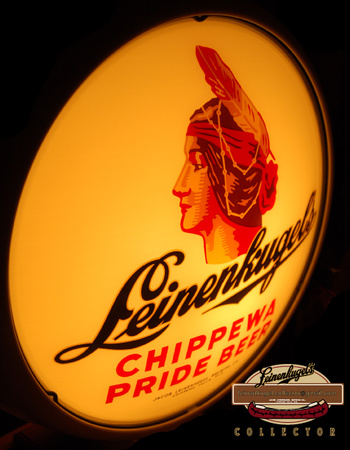 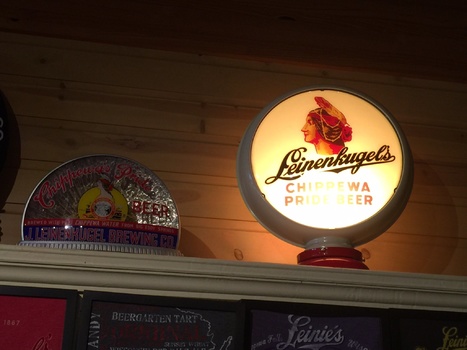 These eye-catching lighted signs, known as ‘Advertising Globes’, were used to advertise beer brands in taverns throughout the United States in a period from the late 1930’s through early 1950’s. Primarily intended to be displayed as a back bar (behind the bar) sign that was backlit with light to advertise beer brands inside a dark bar or outside the door of an establishment.

Even though many baked enamel signs are more than 60-70 years old, many of them retain their original artwork, since the process by which to make these signs created a very durable advertising face that was not easily affected by extreme weather or temperature.

Advertising glass lenses were made by fusing finely ground glass crystals, colored with metallic oxide, onto the backside of glass (thus, why they are called 'Reverse On Glass' or 'ROG' for short). After the artwork is applied by silkscreens onto the advertising sign face it is fired in a kiln that operates at extremely high temperatures, at which point the host medium burned away, leaving the colored glass (or porcelain enamel) bonded directly to the advertising face. It is necessary to repeat this step for every additional color applied to the sign face, so a five color sign face, like this particular globe, had to be fired in a kiln five separate times.

While it is possible to scratch or chip the ad face with excessive abuse, the porcelain enameled finish is quite tough and durable and can spend years languishing in inhospitable environments without the artwork being affected. By contrast, other forms of reverse-on-glass processes that apply silk-screened paints that are not baked onto the surface are often found today with the paint on the advertising face peeling, cracking, or already fallen off.

This particular example was hand-made by silk-screening porcelain graphics onto curved glass in what is known as a ‘Gillco-style’ lens. The exact manufacturing processes and materials that would have been originally used to make these advertising globes are virtually unchanged from those of the original manufacturers of these beautiful pieces of advertising. Much time and effort went into to creating this work of art to promote the appreciation and preservation of the legacy and rich history of the Jacob Leinenkugel Brewery, so if you own one of these limited-edition lenses you are a lucky collector indeed as only a handful of them were ever made.

The pictures shown here were taken inside the Leinie's Lodge, which is located at the Jacob Leinenkugel Brewery in Chippewa Falls, Wisconsin. Rumor has it that this lighted globe is a personal favorite of Richard Leinenkugel, who is in charge of the sixth-generation brewing company. It is proudly lit right next to his office door.

I live in Beaverton, Oregon, which is a suburb of Portland. I’ve been collecting beer collectibles for 34 years now. My passion is collecting and researching the history of advertising from the Jacob Leinenkugel Brewing Company of Chippewa Falls, Wisconsin.

I am a member of the

My passion for Leinenkugels is shared throughout social media:

And through the Jacob Leinekugel Beer Collectors Group on Facebook that I founded: