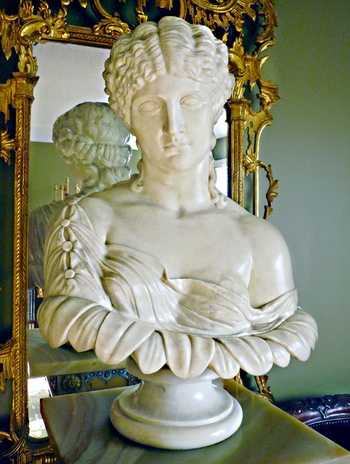 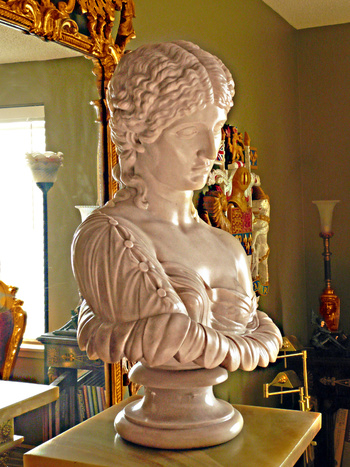 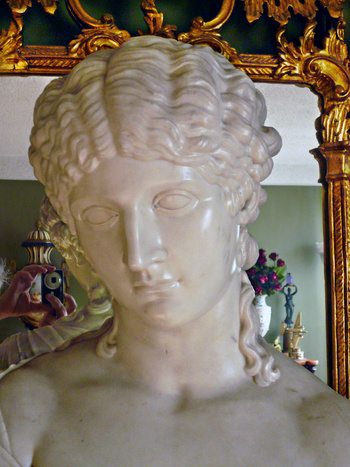 The original sculpture was acquired from the family of the Principe Laurenzano in Naples by British collector Charles Townley (1737-1805). The identity of the subject, a woman emerging from a calyx of leaves, was much discussed among the antiquaries in Townley's circle. At first referred to as Agrippina, the bust is known as Clytie, a nymph who had fallen in love with the god Helios and was turned into a sunflower. This famous bust can be seen in the British Museum.

My sculpture in marble is over life size and was done in about 1870, 28 inches, which date is based on the original wood pedestal it came with after bidding for it at Skinner's Auction in Boston, 1992. The bust weighs around 160 pounds as estimated by skinner before shipping. It now stands on an onyx pedestal of 4 feet.
The light came in so nice to the living room this late afternoon, Feb 18, 2017. There is no category as usual for marble or statuary or anything of intrinsic value. There should be...

One amazing story about this bust is that when I was moving it about 140 feet from the upstairs to the downstairs, the mover was quite strong and usually it took 2 men struggling to lift this alone. He came in the front door carrying this piece all by himself and I was shocked he managed to do all the stairs and then lift it all by himself onto the pedestal without breaking it !! He was less than 180 pounds himself. He also carried my angels which weighed about the same each !