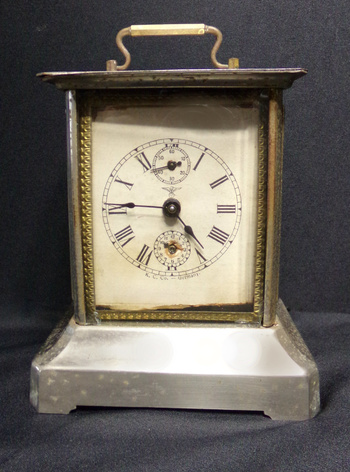 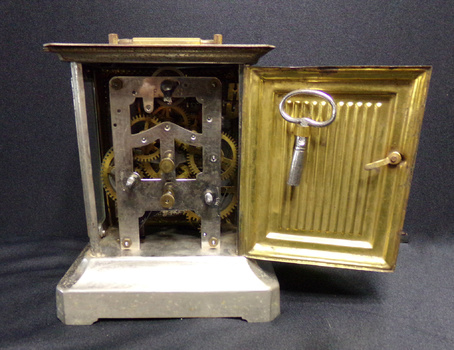 I'm surprised there's no section for this German Carriage Clock. Carriage Clocks are very popular, especially musical carriage clocks like this one. Sadly, due to time, the tines no longer play a sweet melody.

Time is a constantly there thing, yet it seems like a rarity. Our minds often think things drag on forever, and thus associate time with eternity. For better or worse (as everything depends on the situation), on this earth, there is no eternity in anything.
Many people find that out too late. They think, "I will... when...." You can substitute "be happy" for the first ellipses (...), and whatever you want for the second set. Or, you can substitute, "give my precious time to" and "I have time" in for the ellipses. In fact, you can substitute in many things, for, "I will, when" is a common thought that is never fulfilled the way you want it.
Too many things get in the way of "when". In all honesty, you know nothing that isn't already known. Little of the future is set in stone. You don't know if "when" will come, because there are too many things that will lead your life/thinking one way or another.
Worse, people keep changing the "when" date or place in life. A common example: "When I have more money, I will donate more." But when I get more money, I wish not to donate more because I'm greedy and afraid it will all vanish.
"When work gives me a break, I'll spend more time with my loved one." When work gives you a break, typically you spend it doing things that are more pleasurable in the immediate sense, but less beneficial to you and your loved one in the long run.
"When I get this, I'll stop spending so much on all this stuff that I neither need nor have room for". But when you get that most desired item, you find something else you want and your pocket book goes barren as your house fills up.
The thought of "when" is really quite damaging. Same with, "If." "If I.... then...." Not likely. If it happens, you'll still find excuses.
And then time runs out. Your loved one dies. An opportunity is missed. You come into financial difficulty and go into debt. Or, you die, and many things were left unfinished. In all events, time has run down.
Then what?
Even this clock barely ticks anymore. There was a century's worth of time to have it cleaned and serviced, and as time went on it became more and more imperative. Now, it runs for only a short time before dying. There was much time to save it, and there is still enough time for you to save..... A relationship? Finances? Your soul, maybe?
Your mind is worldly. The world will lead you astray. As such, even your mind will lead you astray-- although, less likely would that be if you'd sit down to think and realise some things.
A popular set of lyrics is, "It's not too late. It's never too late." That is as much a lie as, "Your heart will never lead you astray." Just as people cannot think with their hearts, there is a time that "it" becomes too late. The heart deals in matter, whereas the mind is over matter. Time deals in nothing. Only your mind deals in time, which also only exists in your mind. You have time, but deal it out where it needs to be, else it'll run dry and you'll again suffer a great disappointment.

Eventually, I may post a piece again on time, where I say that it does not actually exist how we think it does, for it is a human-created concept. There is no longer a past. There is no future. There is no 'now', for by the time we think of 'now', the now being thought of is past. Time is motion, in my opinion. It is constantly going forward, never pausing to create a 'now', never skipping ahead to create a 'then', and certainly never going backward to let us undo things.