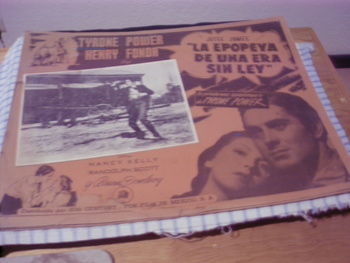 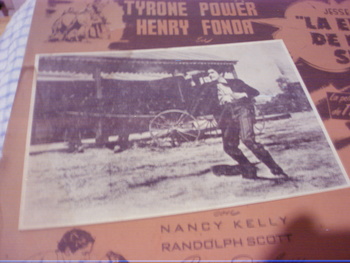 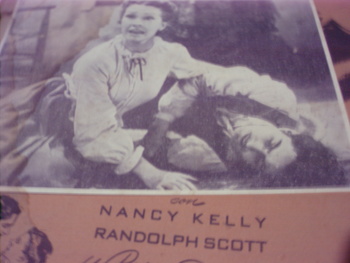 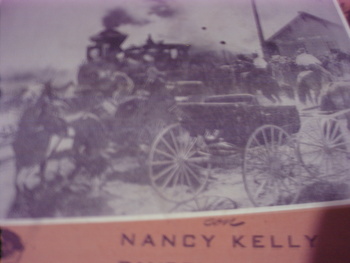 Good evening everyone,
It is great to watch old classic movies when you can find them. The photos of lobby cards ( from Mexico ) pictured above are from the 1939 Jesse James movie featuring Tyrone Power as Jesse James and Henry Fonda as his older brother Frank James. I have seen this movie a couple of times as all the actors are favorites of mine.
The lobby cards are approx. 13"h x 18"long
The first photo features Tyrone Power
second is a close up of Tyrone Power
The 3rd is a wounded Jesse with his wife Zee : Nancy Kelly
The 4th has a great old steam train
I haven't found one of Henry Fonda yet

Jesse James (1939) is a western film directed by Henry King and starring Tyrone Power, Henry Fonda, Nancy Kelly and Randolph Scott. Written by Nunnally Johnson, the film is loosely based on the life of Jesse James, the notorious outlaw from whom the film derives its name.
The supporting cast features Henry Hull, John Carradine, Brian Donlevy, Jane Darwell and Lon Chaney, Jr..

A railroad representative named Barshee (Brian Donlevy) forces farmers to give up the land the railroad is going to go through, giving them $1 per acre (much less than fair price) for it. When they come to Jesse's home, Jesse (Tyrone Power) tells Barshee that his mother Mrs Samuels (Jane Darwell) is the farm's owner.

Barshee repeatedly tries to force her into selling, until her other son Frank James (Henry Fonda) gets involved. Frank fights and easily beats Barshee, but Jesse shoots Barshee in the hand, in self-defence. When arrest warrants are issued for Frank and Jesse, Major A. Rufus Cobb (Henry Hull) editor in nearby Liberty, Missouri and uncle of Zerelda (Zee) Cobb (Nancy Kelly), Jesse's lover, quickly comes to tell them to leave.

Frank and Jesse learn that Barshee is responsible for the death of their mother and Jesse kills him in revenge. This begins Frank and Jesse's career as outlaws.

The movie release had a lot of compatition:

Jesse James was a smash hit and the fourth largest-grossing film of 1939, behind Gone with the Wind, The Wizard of Oz, and The Hunchback of Notre Dame, and in front of Mr. Smith Goes to Washington.
PRODUCTION

Much of the filming for Jesse James took place around the town of Pineville, Missouri in McDonald County, Missouri, because at the time the town and surrounding area looked much the same as it would have in the 1880s and 1890s. The town's historic Old McDonald County Courthouse, a National Register of Historic Places site, was featured in the film serving as a stand in for the Liberty, Missouri courthouse. Pineville still celebrates Jesse James Days annually in homage to the film and the movie stars who descended on the small town to make it. In their off time from filming, the films' stars and crew, including Tyrone Power, Henry Fonda and Randolph Scott, would seek out relaxation at the Shadow Lake resort in Noel, Missouri, on the shores of Elk River (Oklahoma).