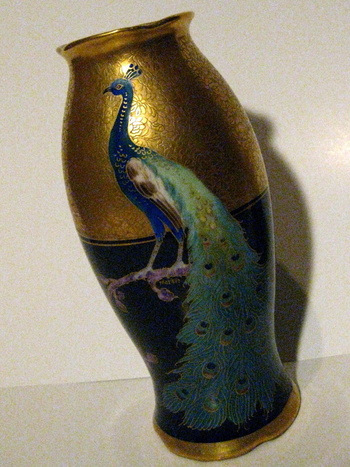 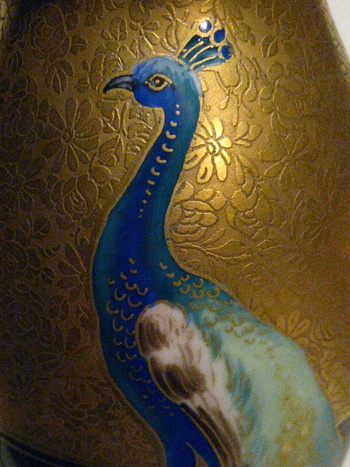 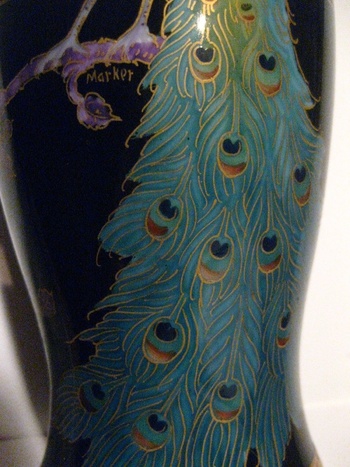 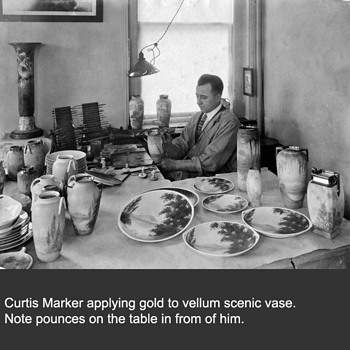 Peacock vase by Pickard Studios of Chicago. It is eight inches high and circa 1927. Curtis Marker decorated it. The rim and base modulate so that is why you see what appears to be a strange indentation in both.

"The Pickard China story dates back to 1893 when Wilder Pickard established the company in Edgerton, Wisconsin. At the turn of the 20th century, Pickard was moved to Chicago where the company specialized in hand-painted art pieces and dessert and tea sets. Artists from the famed Art Institute of Chicago and all over Europe came to Chicago to decorate one of a kind ceramic pieces. These early pieces are now highly sought-after by collectors on the secondary market.

Wilder's son, Austin Pickard, joined the business in the late 1920's and soon began experimentations in developing a fine china dinnerware body. He moved the company to its present Antioch, Illinois location in 1930. . ."

"From the company's beginning in the 1890s until 1935, Pickard was a decorating studio only; it purchased blanks from Limoges, Bavarian, Nippon, and American producers. In 1935, it began producing and decorating porcelain.

Q. Where did the Pickard decorating designs come from?

A. Many of the artists themselves developed their own patterns. Other designs came from similar items from factories in the old countries. For example, Aura Argenta Linear seems to have been a design "borrowed" from pottery Villeroy & Boch manufactured in Germany. Dutch Decoration appeared as a pattern in Keramic Studio, as did Metallic Grapes. Some of the Pickard designs were actually borrowed from popular paintings of the time."

From justanswer.com (describing another vase painted by Curtis Marker):

"Curtis Marker, born 1882, Ohio. Worked at Pickard from 1908 and into the late 1920s. He established a reputation at an early age and became one of the pre-eminent Pickard artists. He painted this Calla Lily when he was only 26, it was one of his first designs and arguably his finest floral one. His scenic paintings in the 'vellum' palette, and some astonishing moonlit scenics, put him at the same level of talent and artistic achievement as Challinor."

The photo of Curtis Marker is courtesy of the Pickard Collectors Club.