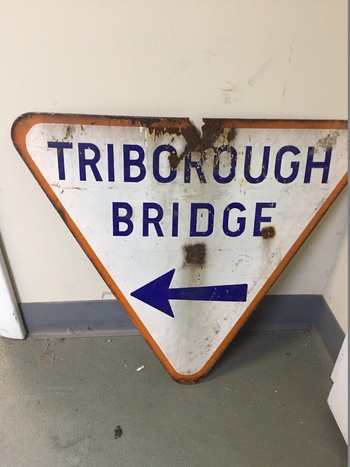 From the city of New York, this marker I believe dates back to the late-1930s. Shield signs, as they are sometimes known as, were common to see throughout New York City in the mid-20th century. Their simple purpose was to indicate to motorists general directions of major crossings. Several variations existed, and each one was triangular in appearance. Additionally, every sign manufactured had its own unique color scheme to identify a certain bridge. Some other crossings that come to mind aside from the Triborough Bridge are the Marine Parkway Bridge (AKA Gil Hodges Bridge) in Brooklyn and the Cross Bay Memorial Veterans Bridge in Queens.