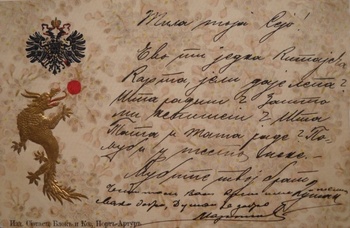 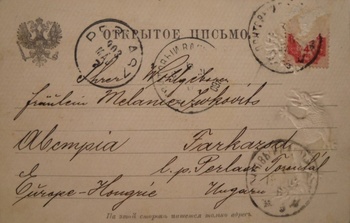 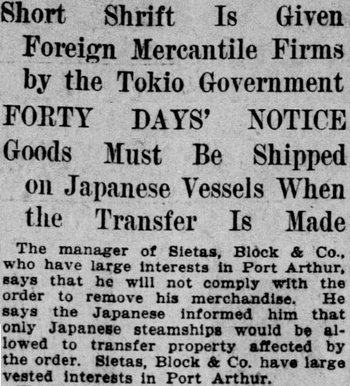 Embossed postcard sent from Port Arthur to a Farkazsd village in Hungarian Banat province (Austria – Hungary), less than a year prior to Russo-Japanese War.
Russian Imperial eagle and Chinese dragon.
Sent to ``My little sister``.
The date on the stamp is May 7, 1903. The Battle of Port Arthur started 8 months later (at 22:30 on Monday 8 February 1904).
As a member of the Allied nations, Austria sent two training ships, four cruisers and a company of marines to the North China coast in April 1900, based at the Russia concession of Port Arthur.
The publisher: Sietas, Block & Co, Port Arthur.
The company was affected by Japanese blockade of Port Arthur, as reported by San Francisco Call, Volume 98, Number 22, 22 June 1905 — ``CLOSING PORT ARTHUR'S DOOR`` (image 4).
J.Jürgen Block, in German Firma: H. Sietas & Co was in business with Germania Brauerei in Tsingtau. Transporting beer was the issue.
Searching for list of Austrian crew.