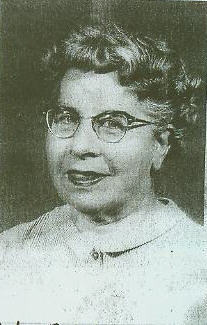 *This is my great aunt Ada Jean, taken around the time she wrote the Family Journal 1963-4
And this is a story written for St. Patrick's Day about 10yrs ago in our Family Site, where Ada's Journal was posted.
I removed the names of the members that posted, but you might be able to tell who wrote some of them! ":^)"
Here's the post! :^)

St. Patrick's Day - This is the way it actually happened!

As we approach the great holiday known as St. Patrick's Day, I thought I'd take this opportunity to enlighten you all to what that celebration is really all about.

The reason the Irish celebrate St. Patrick's Day is because this is when St. Patrick drove the Norwegians out of Ireland.

It seems that some centuries ago, many Norwegians came to Ireland to escape the bitterness of the Norwegian winter. Ireland was having a famine at the time, and food was scarce. The Norwegians were eating almost all the fish caught in the area, leaving the Irish with nothing to eat but potatoes. St. Patrick, taking matters into his own hands, as most Irishmen do, decided the Norwegians had to go.

But, as everyone knows, the Norwegians thought this only added to the flavor of the fish, and they liked it so much they decided to call it "lutefisk", which is Norwegian for "luscious fish".

Matters became even worse for the Irishmen when the Norwegians started taking over the Irish potato crop and making something called "lefse". Poor St. Patrick was at his wit's end, and finally on March 17th, he blew his top and told all the Norwegians to "GO TO HELL".

So they all got in their boats and emigrated to Minnesota or the Dakotas ----the only other paradise on earth where smelly fish, old potatoes and plenty of cold weather can be found in abundance.

What do you think Bill?

* Well it's all clear as mud to me! It seams the story I remember...? St. Patrick, knowing that the Irish were in hard times, and that Ireland couldn't support all the Norwegians that were trying to find the "Promised Land", sent word to the Swedes(who were also starving), "We will give you all the snakes you can eat, if you rid our land of the Norwegeans", so the Swedes agreed, but when they received the snakes they were frozen solid and couldn't be eaten, so the Swedes, knowing that the Norwegeans couldn't be starved out, after all they'ld eat anything, even rotten fish,(they had found that out years ago, when they pushed all the drying fish down into the ashes, to ruin it, but the Norwegeans just washed it off, boiled it and ate it anyway, and made it their favorite food, just to spite the Swedes) so they gathered all the frozen snakes, that were stiff as spears and attact Ireland with them, running both the Irish and the Norwegean off. The Irish went to New York, but the Norwegeans found their "Promised Land" in Minnesota, and the Dakotas! One good thing did happen in Ireland though, all the snakes were gone, and the rats took over the Island, and soon grew to the size of sheep, and turned into "Shepherd's Pie", the food that saved Ireland from starvation!
Now, this was what I remembered, as the truth of St. Patrick's Day!!! :^)

You didn't disappoint me one bit with what you believe to be the truth, Bill!!  You make one fine story teller.

And to think that all I said was, "What do you think, Bill?"

This is such a neat story - I think I believe it. A little harder to believe, tho, is Bill's response, you guys just made my day!

I tend to agree with you on Bill's story, but I sure bet he had fun writing it. Maybe he missed his calling, huh? I'm glad we have given you a chuckle for the day! We all need that most days. When I added this, I was sure we would get a rise out of some of our family!!

They say the Irish are storytellers! If I come across an angry-looking Norwegian or Swede, I'll try to come up with a new last name, in a hurry. On the other hand, if I'm invited to dinner; I'll find out what is on the menu, before deciding if I am "indisposed" or bringing desert. Thanks for the "heads up"!

*If you couldn't figure it out the things I posted started with * and ended with :^)

Thank you for looking, hope you enjoy! :^D