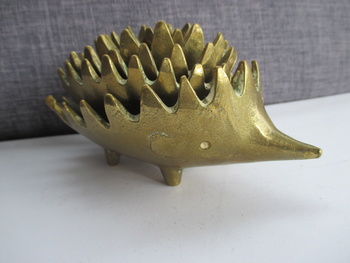 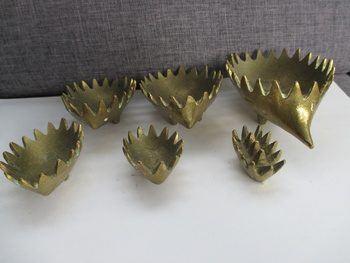 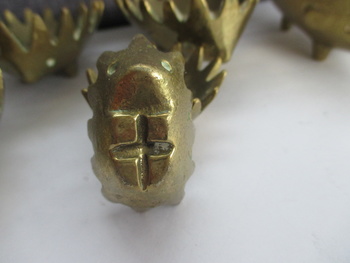 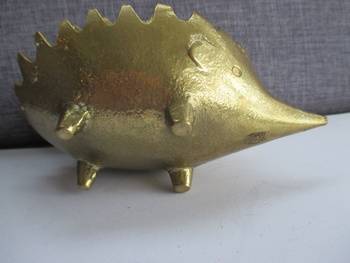 A set of Walter Bosse hedgehog ashtrays. No marks.

After checking modernbronzevienna.com I believe these are the real ones
What do you think?

More info from modernbronzevienna.com:
At the end of 1952, Walter Bosse moved from Austria, where he lived since his birth in 1904, to Western Germany. He settled in the area of Iserlohn, because creditors were chasing him and his friends and business partners were cheating him. He wanted to concentrate on his job of being an artist. This time was very productive for Bosse, and he created an entire collection of new designs in the late 1950s. During that period, the hedgehog ashtray set was born. It was a revolutionary design, and quickly became popular worldwide. He was not able to even keep up with all the international orders and looked for partners to perform the casting on his behalf. Some foundries used his moulds and masters without discretion and sold models illicitly without his knowledge. Meanwhile, many thousands of copies based on Bosse’s design were being produced and sold throughout the world. The Russian airline Aeroflot even produced a set as a gift given to their frequent flyers. Copies were made in Spain, Greece, England, Austria and Germany. Bosse knew about this, but he kept on selling his hedgehogs at the Frankfurt International Fair for many years. Interestingly enough, Bosse’s hedgehogs could have made him a millionaire: Woolworth offered Bosse a several million dollar contract for the copyright of the ashtray set but Bosse would not agree. He feared that with mass-production, the hedgehogs would lose the charm and quality of his originals.
Bosse spent most of his later years fighting copyright cases for his items, mostly over this set of hedgehog trays and hand-shaped ashtrays. They were among his most prolifically stolen designs. Unfortunately, he was not able to benefit from the court’s decision. Bosse died soon after the courts decision to award him copyright of his items. His was the first decision of its kind and a landmark case that would live on and benefit all arts and crafts makers and designers from that point forward.