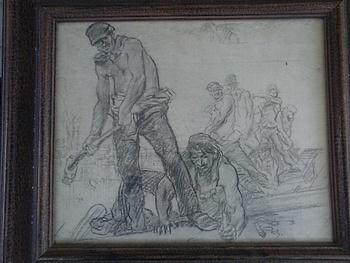 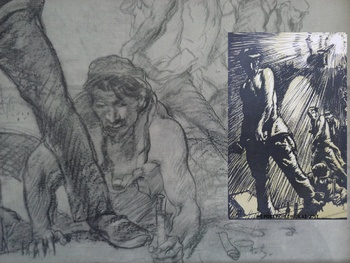 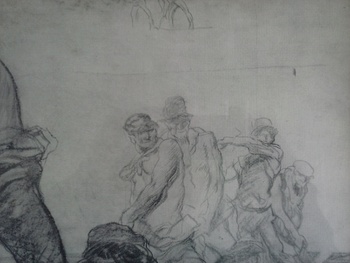 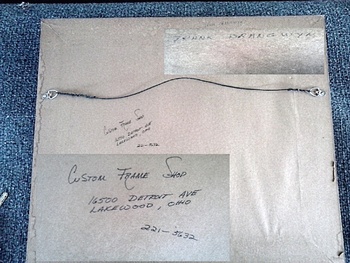 Seems like every time I go to Salvation Army on half price Wednesdays I find a great piece of art. I spotted this framed drawing sitting in a plastic bin on the floor with a group of other pictures. I checked it closely with my magnifier...yes it was a real sketch. I turned it over and saw the frame shop name, but also another name I didn't recognize." Frank Brangwyn" written very faintly at the edge of the backing paper. I figured well I'll look it up when I get home. Wikipedia comes through again !... Sir Frank William Brangwyn RA RWS RBA (12 May 1867 – 11 June 1956) was an Anglo-Welsh artist, painter, water colourist, engraver, illustrator and progressive designer. Well this sure proves I don't know everything but I did recognize the quality in the work. A veritable "jack of all trades". You name it and Frank probably did it. It has been estimated that during his lifetime Brangwyn produced over 12,000 works. His mural commissions would cover over 22,000 sq ft (2,000 m2) of canvas, he painted over 1,000 oils, over 660 mixed media works (watercolours, gouache), over 500 etchings, about 400 wood engravings and woodcuts, 280 lithographs, 40 architectural and interior designs, 230 designs for items of furniture and 20 stained glass panels and windows. This is more than likely a study for one of his many works. He did several murals for the 1915 Panama-Pacific International Exposition, San Francisco. Most were preserved and installed in other venues. He didn't always sign his work until he became well known. This sketch has his very indistinct "FB" monogram. A couple strokes for the "F" and what looks like a backward "3" for the "B". So that's the reason the frame shop wrote his full name on the back. I would never have known the artist or found the monogram without it. I really dislike the ugly walnut frame and it should be matted so it's not touching the glass. I'll find a nicer frame eventually but I won't tamper with it for now. Quite often there is more information to be found once the back is opened and the drawing removed. A nice little find if I do say so myself. -Mike-

NOTE: 3/30/2017
Well, I'm almost 100% sure this is a very good reproduction. Even under magnification it still looks like real pencil. There's a slim chance it's an engraving of some kind. Once I opened the frame I found the drawing paper was glued to a heavy piece of art board. The edges of the drawing almost look like it was photo copied. There's a pale grey line running down the sides. I tried to get some pencil residue on a Q-tip by rubbing it on the darker areas. Perfectly clean. A real drawing would show some residue even if it were fixed. Oh well not the worst 15 bucks I've spent including the new 5 dollar frame which looks great by the way. Live and learn ! -Mike-