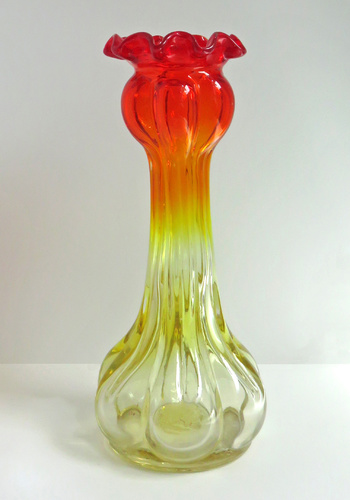 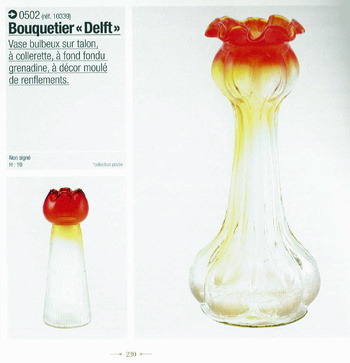 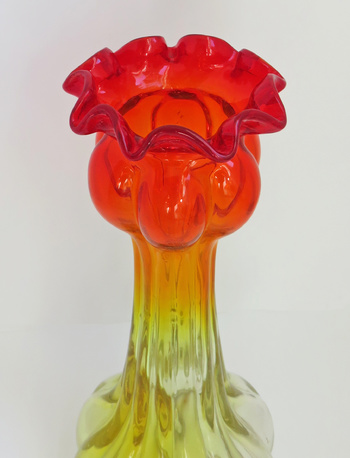 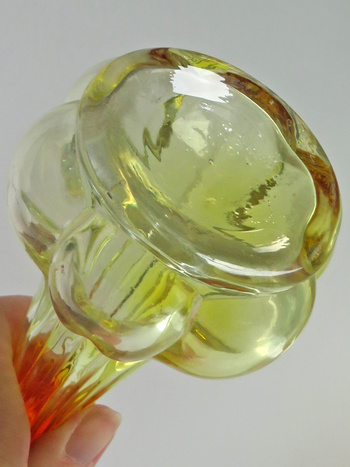 I am very pleased to be able to share a rare vase made in France by Legras et Cie, c. 1900. It is in a classic hyacinth vase form, in a brilliantly colored glass that starts as a fiery red-orange and fades to the palest yellow.

The exact form is documented in the excellent book 'Legras: François-Théodore Legras verrerie artistique et populaire française' by Dominique and Jean Vitrat and Jean-François and Marie-Françoise Michel, where it is identified as being the 'Delft' model (image 2). The name makes sense as it would have been used for forcing Dutch hyacinth bulbs. It is surprisingly heavy, and has a smoothly ground and polished pontil.

Vases such as these are rarely seen, and I often wonder if it is in part due to misidentification. Amberina glass was first patented in the United States in 1883, but many people do not realize that French glass makers such as Baccarat and Legras also made quite a bit of amberina glass during the late 19th century. Amberina glass was also extremely popular in the the US in the 1960's, and many pieces can be seen for sale on Ebay (many by Kanawha). My particular vase was described as a 1960's amberina vase, but the shape and brilliant colors made it clear to me it was not. Also, in hand, the heaviness, polished pontil and clarity of the glass make it clear it is not a modern piece.