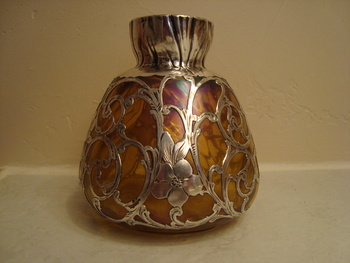 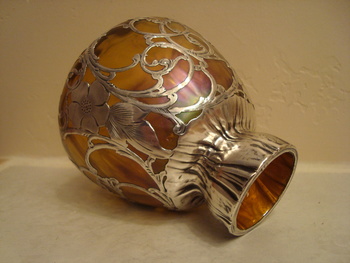 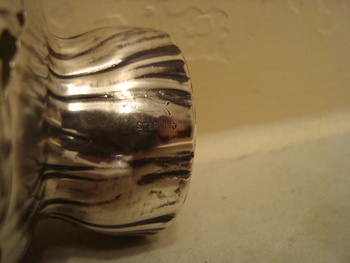 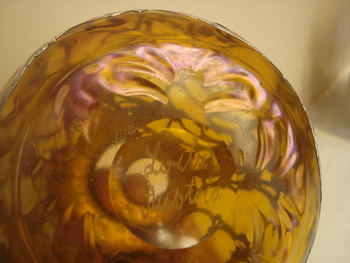 This awesome little vase is a bit of an enigma for me. It is a 4.5" tall x 4" wide, amber or Candia glass with strong iridescence of purple to blue-green. It is substantial and shows a raised arching pattern similar to Esmeralda or Wellenoptisch but it is neither. The raised pattern repeats 4x around the vase and can be seen causing folds in the silver, most notably at the neck.

The vase has heavy silver overlay and is marked sterling with the mark of a "fish with an L" in its mouth, i.e. Fishel, a turn-of-the-century American silver company known for its jewelry, not vases.

The vase has a polished pontil and a wheel cut signature Loetz Austria. I have scrutinized every example of an authentic signature that I can find and it appears to be spot on.

So, while the glass maker is Bohemian, the ornate scrolls of the silver appear to me to be late 1890's Victorian. Loetz was using this signature until 1903 and Fishel was operating until 1910. Both the Esmeralda and Wellenoptisch patterns were not introduced until 1904.

To top it all off, I cannot find a similar shape example to draw from. Any help in identifying this would be greatly appreciated.