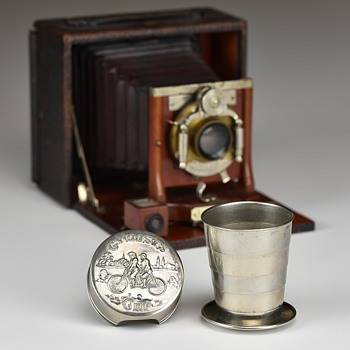 Spring is here ... time for a bike ride!

The collapsible nickel plated “Cyclists Cup” featured here is based on an 1897 patent by John Lines. It must have been a popular item to take along because this example has a nicely embossed scene of a man and woman riding a tandem bicycle in the country side.

Starting in the 1880s, small wooden cameras were being made to carry on bicycle rides. By the 1890s camera makers had a belief that cycling and photography were destined to be together; and manufacturers were advertising a variety of cycle-style cameras with specially designed leather cases that could be strapped to bicycle frames.

Although not specifically a camera accessory, I display this Cyclists Cup with a couple of my early wood & brass cameras as something that was probably brought along on jaunty rides in the country.