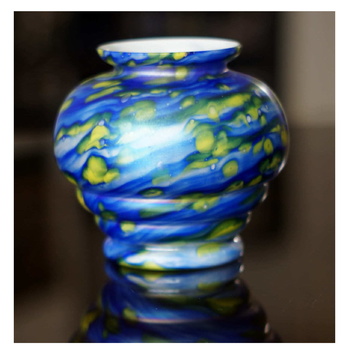 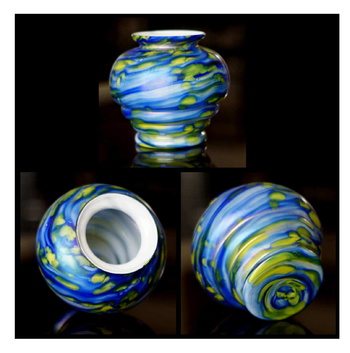 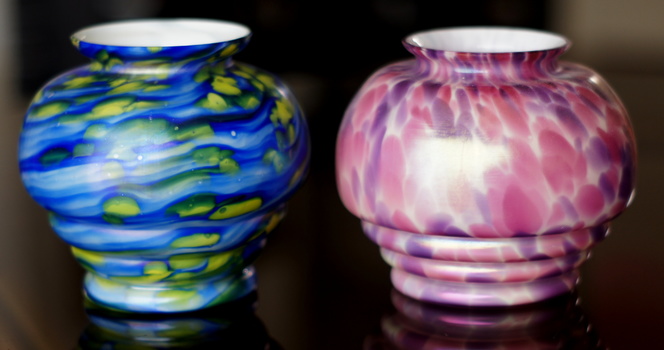 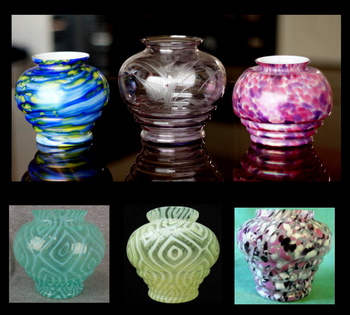 This is a Welz shape which I have loved for a long time. Examples do not come along very often. I had an example of the shape in Pink and Purple which was destroyed in a shelving unit collapse, and it took me a couple of years to replace it.

A friend sent me a link to an ebay listing for a piece of North American glass from an estate sale being offered, and I obtained a second example of the shape. Obtaining it for me was important for a couple of reasons. One reason was for the comparison of how shapes can change slightly with different versions of a mold, and yet they remain the same in so many ways. The other reason it was important was because the décor on it is one I did not have, and one that does not come along all that frequently either.

The new example is in a blue and kind of yellow green iridescent swirl. The piece is highly iridized, and feels quite satin like to the touch. The size is approx. 5 inches in height, and 5.5 inches in diameter at the waist.

The first two pics above show different views of the shape.

The third image above shows two examples of the same shape, with visible differences between them. Both of these decors are solidly linked to Welz through multiple shapes.

The top row of the last image shows the two Welz examples with an example of a very similar, yet distinctly different shape between them. The middle example is unidentified, and is actually etched with a design which would be classified as “Futurism”. Futurism was a distinct, yet short lived aesthetic which emerged in Italy in the early 20th century. The ground color of the piece is a very light purple or violet. The piece is the only piece I have in my collection done in the Futurism aesthetic. They are extremely hard to find.

The bottom of this image shows 3 examples in what appears to be 2 examples in the same shape as the Futurism vase. It has been suggested that the opalescent examples may be by Harrach, but that has not been confirmed by anyone with an in depth knowledge of their production. To the best of my knowledge, the maker of this shape has not been identified. The last example in the row is an example of a shape which I believe is a Kralik form, and is shown in a Butler add.

I have included the additional shapes in the picture to show how closely some shapes can be related, and yet be distinctly different. These differences and similarities are details which in my opinion are critical to doing supportable research, and are the subject of many of my posts in this forum. There are some that might declare these to be a variants of the same shape separated by time, but in fact I believe they are production from different companies. Differences are details which need to be accounted for reasonably, and not dismissed off hand to fit a theory, or preconceived notion.

When I first saw the Futurism example my initial quick reaction to it was that it was the Welz shape, but a detailed analysis of the shape revealed it’s striking similarity, yet distinct differences.

I have always said that the answers are always in the small details, and this is a good example of why.

Thrilled to have them all…. And the middle example is one of my favorite purchases from the last couple of years….. Sorry the pics of it are not better, but it is nearly impossible to photograph with out some form of glare.