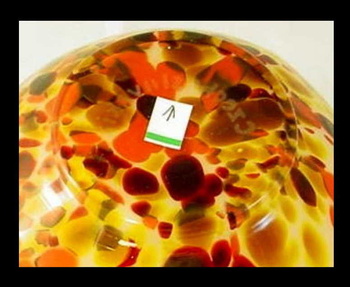 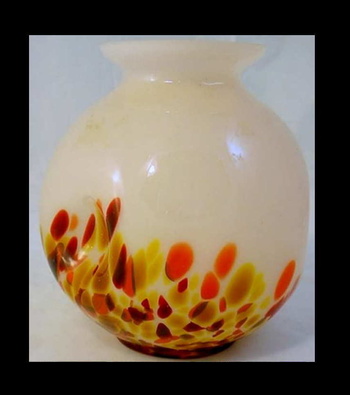 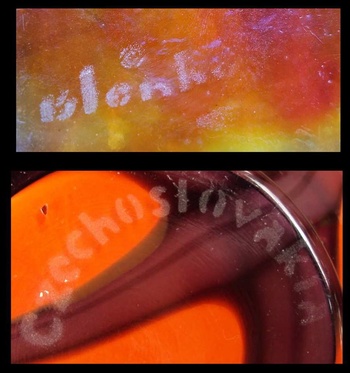 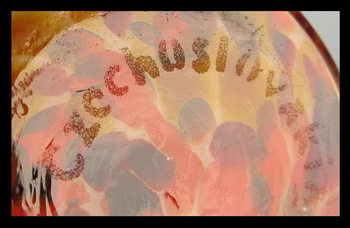 I was talking about glass with good friend who called me the other day, and was reminded of an image I had come across which really settled a discussion from years ago, with a piece of irrefutable evidence…. And by irrefutable, I am talking about something for which there is absolutely no other possible reasonable explanation….

The conversation in question was one that has occurred through the years, but was elevated to a whole new level a few years ago. The topic of the conversation was a discussion of the Kralik arched mark and the use of a stencil to create it. At that point the topic had centered on ideas of whether the mark had been produced using some form of pressurized sand blasting (easily done with silicates used to create glass), or if it was done with an acid spray, which I personally felt was too caustic to be used around glass for that purpose.

One of the individuals involved in the discussion was adamant about the fact that it could not have been done with a stencil, and that a stamp dipped in acid was the only thing that made sense…. The ensuing discussion resulted in his leaving the discussion group…..

"DID YOU KNOW DRACULA'S DESCENDANTS WORKED FOR THE CZECH GLASS INDUSTRY? THEIR SALIVA WAS POISONOUS, SO THEY SPIT ON STENCILS AND POLISHED THEM WITH THEIR TEETH TO CREATE THE MARKS.
Sorry, but that's how absurd the discussion has gotten. i will quote from someone who wrote me privately. Stamps dipped in acid, impressed, as easy as marking an envelope. Do you REALLY think these workers had the time to sand blast, etch or engrave a sh---y export mark? "

And actually....... I did think that.... they had the time, and it was cost effective and easy, and used materials already on hand that did not really need to be replenished, simply reused...... but that was absurd!!

I have always said that if one is patient enough and waits long enough that an answer to a question, if one pays enough attention, will come to light.

One of the first pieces of information that came to light for me was a discussion about an American art glass line, which did do a sand blasted mark on glass. That company was Blenko. This at least was a piece of evidence that indicated that the concept of sand blasting a mark was not only feasible, but practical and had been done. In the case of Blenko it was documented that the mark had been sand blasted using a stencil.

When I read this, the age old question of the Kralik arched mark and the elusive answer of stencil or not, crept back to the forefront for me. The design of the lettering in the Kralik arch spoke loudly to a stencil….. but those that know me well, know that I like as much supporting evidence for things as I can possibly find. Strong supporting evidence…… The more the better..... and the other day I came across some accidentally in my archive of images, without realizing that I actually had it….. irrefutable, undeniable, unequivocal proof that the Kralik arch was done with a stencil.

The fact that a stencil is by nature cut into a thin sheet of material, the open O’s found in the marks certainly seemed to visually support the idea of a stencil…. And yet, there were still those deniers…. Those who felt a concept not involving a stamp was ludicrous……

So above in the images is a Kralk ball vase, and the underside of that ball vase has an arched Kralik mark….

Ooops…. It appears that the stencil was place on backwards, so the mark is a mirror image of what it should be….. an effect only achievable with a stencil application…. Impossible to achieve with a stamp of any type…… unless of course you made the stamp to be that way intentionally....

My personal issue with an acid etched mark is that in order to etch deeply into the glass the acid would have needed to be applied in a great enough amount so as to remain liquid long enough to mark the surface deeply, as many Kralik marks are pretty deep. Acids would also have had a cost to the glass house, and would not have been reusable, thereby incurring reoccurring costs. Additionally, the use of acid would have been hard to contain in such a manner as to prevent unwanted exposure of glass to the liquid.

Sand blasting or etching would have used a resource already on hand, and could be reused over and over to mark glass. We may never know the answer for sure.... But at least now we can be confident when we state that it was a stencil applied mark..... and not really such an absurd concept after all.

I am a firm believer that with time, the actual facts almost certainly come to light..... and in my research, it has been proven over and over to be true. Sometimes it happens quickly, and sometimes the answer to a single question can take many years.

So now the only real topic left to discuss would seem to be if you are in the "spraying acid or another liquid to etch it with a stencil" camp, or the "sand blast it with silicate" camp……

Personally, I am in the silicate camp….. and you???