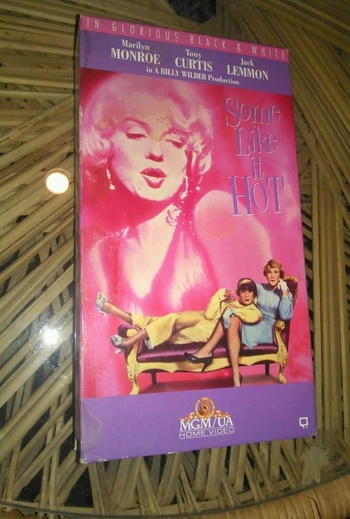 PLEASE ENLARGE MY PHOTO FOR BEST VIEW
Maybe "nobody's perfect," as one character in this masterpiece suggests. But some movies are perfect, and Some Like It Hot is one of them. In Chicago, during the Prohibition era, two skirt-chasing musicians, Joe and Jerry (Tony Curtis and Jack Lemmon), inadvertently witness the St. Valentine's Day Massacre. In order to escape the wrath of gangland chief Spats Colombo (George Raft), the boys, in drag, join an all-woman band headed for Florida. They vie for the attention of the lead singer, Sugar Kane (Marilyn Monroe), a much-disappointed songbird who warbles "I'm Through with Love" but remains vulnerable to yet another unreliable saxophone player. (When Curtis courts her without his dress, he adopts the voice of Cary Grant--a spot-on impersonation.) The script by director Billy Wilder and I.A.L. Diamond is beautifully measured; everything works, like a flawless clock. Aspiring screenwriters would be well advised to throw away the how-to books and simply study this film. The bulk of the slapstick is handled by an unhinged Lemmon and the razor-sharp Joe E. Brown, who plays a horny retiree smitten by Jerry's feminine charms. For all the gags, the film is also wonderfully romantic, as Wilder indulges in just the right amounts of moonlight and the lilting melody of "Park Avenue Fantasy." Some Like It Hot is so delightfully fizzy, it's hard to believe the shooting of the film was a headache, with an unhappy Monroe on her worst behavior. The results, however, are sublime