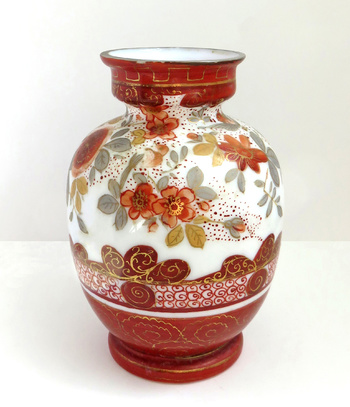 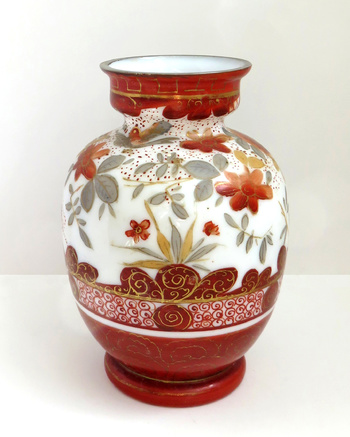 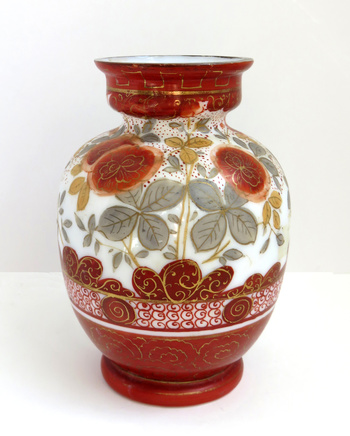 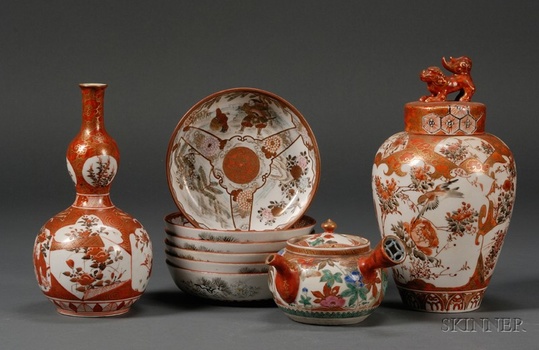 Over the last few years, I have become very interested in a fascinating part of the decorative history in Europe and America that occurred when Japan opened its ports to international trade in the 1850’s. Its influence on European art and design was tremendous.

When I came across this unusual glass vase a few months ago, it really caught my eye and I snapped it up. What fascinates be about it is that it was made in Europe, and is attempting to be an almost exact copy of aka-e style (predominately orange-red with gold) Kutani Japanese porcelain. Kutani is a traditional Japanese form of porcelain decoration from the region of Kutani (Ishikawa), and usually features bright colors and imagery of nature, flowers, birds and sometimes people.

From what I have read, Kutani porcelain was first exhibited in Europe at the Vienna World Exposition in 1873. It was so popular that it helped to fuel the large amount of Japanese imports that started to flow into Europe at that time. I find it very interesting that a European glass maker wanted to capitalize on this popularity by making almost exact copies of Kutani ware, but using glass.

From the colors used, to the floral motifs, to the gold detailing on top of the colored enamel, my vase was designed to copy Kutani porcelain, but the enamel work was done on an opaque white glass. It has a cut and polished rim, and stands just over 5” (12.7cm) tall. Although my vase is unmarked, Warren Galle has an ewer that is decorated in a very similar style that is numbered on the bottom in the Harrach manner. After seeing his ewer, I believe my vase was also made by Harrach, c.1880. As you can see in my photos, the floral motifs change constantly around the vase. The last image shows examples of Japanese Kutani porcelain for reference.