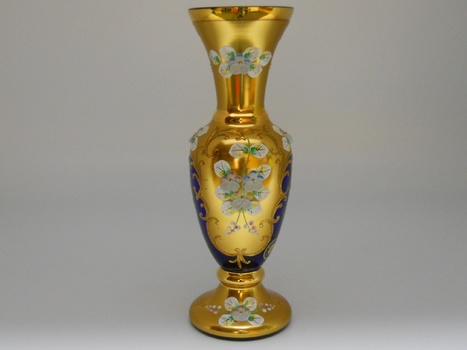 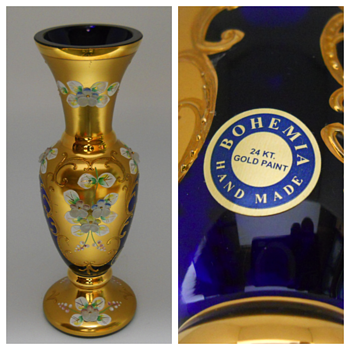 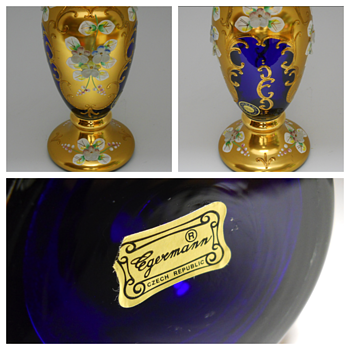 Today while I was at the Salvation Army hunting for jewellery and glass, I found this very nice EGERMANN CZECH BOHEMIAN GOLD ENAMEL BLUE CRYSTAL VASE, with 2 label, WOW, no doubt this is Bohemian, 24 K gold plated with raised flowers decoration an absolute beauty, very heavy and thick glass, at $3.99, I couldn’t resist.

The company Egermann is situated in the scenic city of Novy Bor in the beautiful area of Northern Bohemia, Czech Republic. The roots of this glassware company goes back to the beginning of the 19th century. The name of the company comes from the famous glass technologist and glass painter, FriedrichEgermann.

Egermann, born in 1777 in North Bohemia, learned the art of painting as an apprentice in Meissen, German. Meissen was at that time the center for porcelain. He learned the different manufacturing processes and how to paint on porcelain. Back in Novy Bor he focused on painting glass and he devoted his time to experimenting with new decorating techniques.
About ten years later, in 1829,heinvented Lithyalin glass. This type of glass has a marble look. Actually the material was already known but Egermann worked the surface in such a way that they looked exactly like precious stones. These glass stones became very popular and Egermann and immitators exported their products through the whole of Europe. His invention of the Lithalyin glass stones was the first impulse with which Friedrich Egermann changed the glass industry in Bohemia and the rest of the world. He showed the other glass makers that by innovation it was possible to change your market position.

Then in 1832 he did his biggest invention: the red glaze. Red was always a popular color for glass and until then the glass makers only knew how to make a nice ruby red with the help of the expensive ingredient gold.
Egermann found a way to make a nice ruby red glaze with the help of just copper ions. This invention made him rich. Unfortunately the formula was stolen around 1840 and soon after that the technique spread over Europe and US.

His inventions didn’t only make him a rich man, but he also got numerous prices and honors for his work and when he died, in 1864, Friedrich Egermann was famous around the world.

The factory in Novy Bor, still produces the so called Egermann glassware. First they produce the “raw” glazed glassware and after that they do their famous cutting, etching, engraving and other decorations.