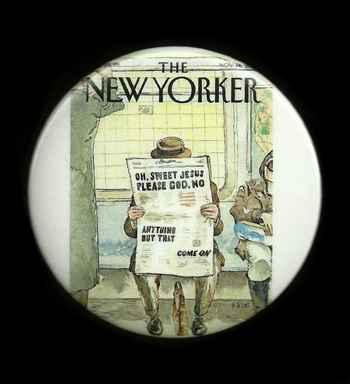 This button shows the cover used for the Nov. 14th 2016 issue of The New Yorker, titled "Anything but that" by Barry Blitt 3" diameter
A little hard to read unless you click to enlarge but reads:
OH. SWEET JESUS GOD NO
ANYTHING BUT THAT
COME ON
This ended up being about Trump however when asked Barry Blitt says,
"It’ll apply next week, whether it’s one or the other, And it’s nice to take a break and not have to draw Trump—or Hillary, for that matter.”