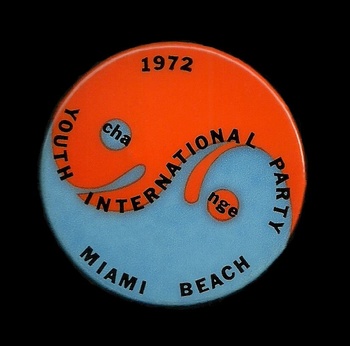 Youth International Party (YIPPIE) Protest button for change used at the July 10 - 14 1972 Democratic National Convention in Miami Beach, 2" Diameter.
Had the YIPPIE Flag posted (Black background with a Red star and Marijuana leaf over it) plus a few protest pics up but this made the button image rather small, If anyone wants to see the flag I can put it back up.

"What does Yippie! mean?" Abbie Hoffman wrote. "Energy – fun – fierceness – exclamation point!"
The term Yippie was invented by Krassner and Hoffman on New Year's Eve 1967 We needed a name to signify the radicalization of hippies, and I came up with Yippie as a label for a phenomenon that already existed, an organic coalition of psychedelic hippies and political activists. In the process of cross-fertilization at antiwar demonstrations, we had come to share an awareness that there was a linear connection between putting kids in prison for smoking pot in this country and burning them to death with napalm on the other side of the planet.
Anita Hoffman liked the word, but felt that the New York Times and other "strait-laced types" needed a more formal name to take the movement seriously. That same night she came up with Youth International Party, because it symbolized the movement and made for a good play on words.

This Convention went smother for all concerned compared to 1968 the war as well as the draft were still issues and many groups voiced there concerns including the Yippies and Vietnam Veterans Against the War.

July 14th 1972 DNC nominated Senator George McGovern of South Dakota for President and Senator Thomas Eagleton of Missouri for Vice President. Eagleton later withdrew from the race when it was disclosed that he had undergone mental health treatment, including electroshock therapy, in the past, and he was replaced on the ballot by Sargent Shriver of Maryland, a Kennedy in-law

A coalition of gay rights groups at the convention "drew up a proposed platform provision that called for, among other things, repealing laws against homosexuals marrying". The provision was rejected by a vote of 54–34. Afterwards, however, two delegates, Jim Foster and Madeline Davis (the first openly-lesbian delegate to a major national political convention), spoke publicly on its behalf.

On a personal note I was 100% against the war and 110% for our troops having Family and friends who served, also 1000% upset with the way too many were treated once finely home - Least we never forget.
Peace