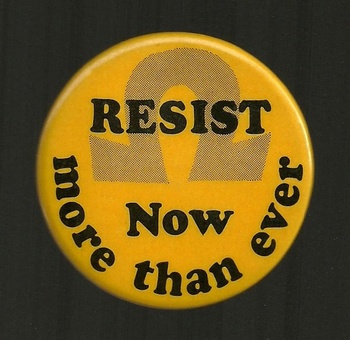 1972 Resist Now More Then Ever button 2 1/8 diameter,
The curl has the maker's mark NG SLATER CORP NYC 11 and an oval AFL-CIO Union made logo opposite side of the curl has a copyright logo and John Swinglish 1972
John Swinglish was one of the Camden 28.
The Camden 28 were a group of "Catholic left" anti-Vietnam War activists who in 1971 planned and executed a raid on a Camden, New Jersey draft board. The raid resulted in a high-profile criminal trial of the activists that was seen by many as a referendum on the Vietnam War.
John Swinglish returned to Washington, D.C., after the acquittal of the Camden 28
This was bought about 10 miles south of Camden.

I think he added the "Now more then ever" as the Resistance had made some progress. One of the most uncommon Resistance button's out there most are smaller and only have the symbol and is the first/only example I've seen of this button.

Also could be used toady for the "New Resistance" movement.
( I like a pure black background so I will likely re-scan this after dark)