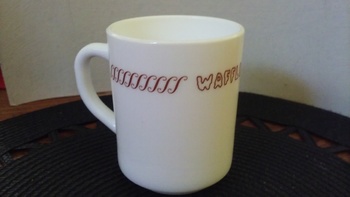 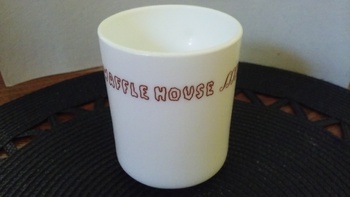 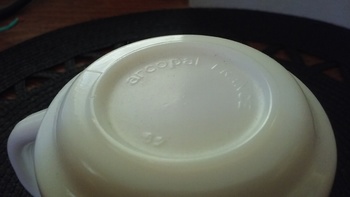 WAFFLE HOUSE is an iconic chain of 24/365 'we never close' restaurants scattered all over the southern USA, often found at interstate highway interchanges, which began in the mid 1950's near Atlanta GA.

(oddly not mentioned on their official website is the fact that, due to the 24/365 thing, they are *also* a long time favorite of the "after the bars close" crowd <lol> and, slightly too frequently, the 'late night robbery' crowd... <eeek>)

They really are generally entertaining restaurants and the food is consistently pretty good. (also greasy of course, but hey -- its a diner?!) If you'd ever happen to stop at one, this is an example of the cup you'd probably get your coffee served in. It (and most of the rest of WH dishware) is made of opaque white glass, this cup identified on its bottom as by "arcopal FRANCE".