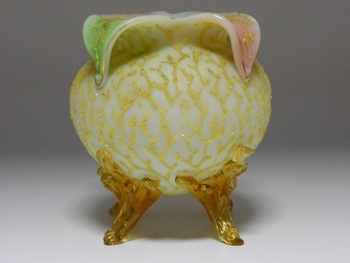 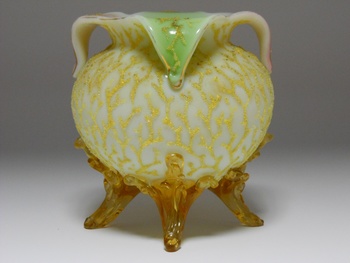 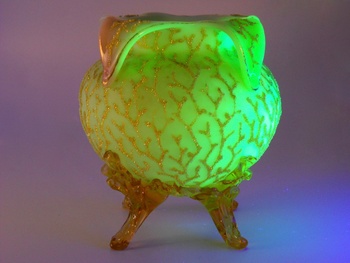 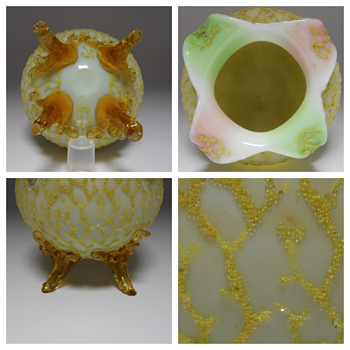 Hello Followers, Visitors, Members and Friends from Collectors Weekly, 16-05-2017, 12:00 AM
This is a new addition to my Bohemian collection, described by the seller as an early LOETZ, after I show this vase to a good friend collector, he suggest this could more Harrach or Moser, after looking online and research my vase and compare with what I can find, I will more likely go with Harrach, as I couldn’t find any Moser with those kind of legs.
Opaline glass, UV reactive, with Coralene applied decoration.

Coralene glass was a Victorian form of decoration on glass. A picture or design was painted onto the glass with "syrupy" enamel paint, and tiny glass balls were applied to this surface, then re-heated so they partially melted into the surface. The result looked a little like the rough surface of coral.

Coralene was first patented in 1883 by Schierholz in Germany, but very soon afterwards was being exported in large volumes from Bohemia and also made in the USA by the Mt Washingon Glass Company in New Bedford. It was sometimes called "Coral beaded" or "Coralene beaded" and various other names. The Mt Washington coralene designs, as well as those from Bohemia, often imitated strands of coral patterned over the glass.

The popularity of Coralene extended into the 1920's, in the early 1920's the Handel Company of Connecticutt, USA, produced a version which they named "Fabrikon". Recently (latter part of the 20th century) fake "coralene" pictures have been produced, sometimes on genuine original glass.