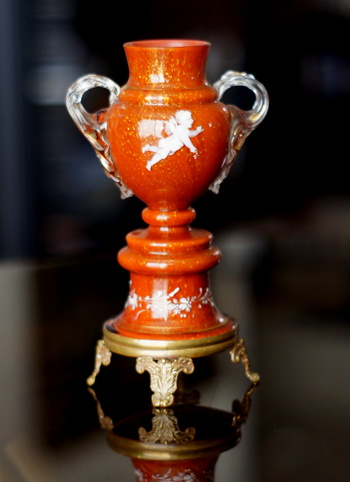 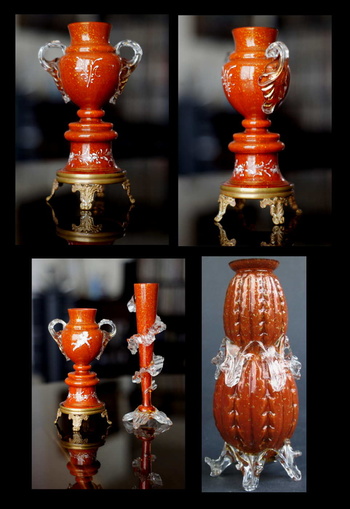 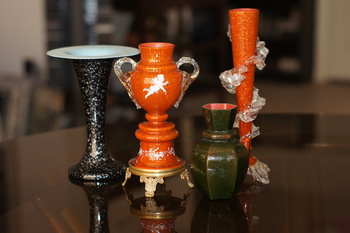 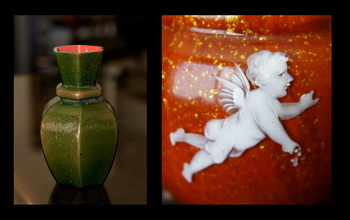 So a number of years ago in early 2013, I purchased an interesting tall cone shaped vase with applied spiral rigaree, on a burnt orange vase with gold appearing mica. At the time I suspected it could be Welz, but with nothing to even remotely support that suspicion at all I simply put it in my display case and moved on.….. Still, a very pretty piece of glass in an unusual décor that I like quite a bit.

A while after that, still in 2013, I posted the vase in a discussion on a different glass forum, and I was shown a different example of the décor on a very unusual shape…. One that to this day is the singular example I have ever seen….. And still I suspected Welz…. But only a lingering suspicion…… Still unsupported in any manner.

To this point in time, I had already identified a décor by Welz which I referred to as Salt & Pepper. A black décor with silver appearing mica flecks, found with a number of brightly colored interior linings. But I still had not identified a décor which I felt was comparable to the Burnt Orange example.

About 2 years ago I was gifted a piece of glass by someone I had helped identify glass they were going to sell on ebay, and when I was sent images of it, I was shocked to see a décor with the same interior color and small mica fragments covered in a transparent green glass…… Due to the fact that the examples was on a documented Welz shape, it was apparent that Welz made a similar décor to the burnt orange, but close is not really good enough for me….. so my wait continued…… now with a much stronger suspicion.

About a month ago a good friend sent me a link to an ebay item, and I was completely shocked by what I saw. A Welz trophy vase in the same burnt orange décor as my cone vase…. So I bookmarked it and placed a bid as it ended…. And I was outbid. A couple of weeks later I received an email from ebay with a second chance offer….. and it was the vase….. so I snagged it…… It showed up poorly packed, with two metal legs bent inward, and it was an absolute miracle that it was not destroyed in transit. In 20 years on ebay, it rates in the top 10 of poorly packaged items I have received. The feet are 3.75 inches across, front to back…. And the box was 3.25 inches….. The glass alone is 3 inches front to back…. But it arrived without being shattered, and some delicate work with a small needle nosed pliers “restored” the metal work.

I believe that the example was sold to a refiner, who then attached the metal base and did some enameling……. The quality of the enameling is a grade or two above what is generally seen on Welz production….. and those that know me well know that I generally avoid enameled glass….. but this one could not be avoided.

The second image above shows side and back views of the piece, which has some worn gold enameling on the body and also on the applied handles. It also shows the original cone shaped vase that started this journey, and the bottom right is the only other piece I have ever seen in the décor. There is a amber transparent casing on the pieces which causes the silver mica to appear gold in color.

The third image shows the two burnt orange examples, a Salt & Pepper trumpet vase and the small green example in a documented Welz shape. I am confident at this point that these are all examples of Welz production. The trophy vase can be found in a wide variety of identified Welz décors, as can two other shapes in the image. The tall cone shaped example is also the singular example of that shape I have seen so far.

The trophy vase stands at about 7.5 inches with the metal base, and is 4.25 inches wide at the handles. So a suspicion I had for almost 4 years is finally resolved….