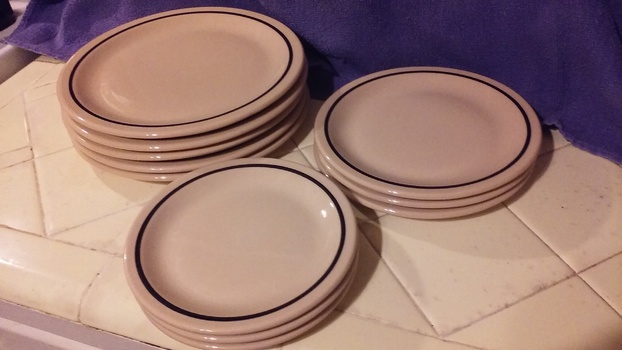 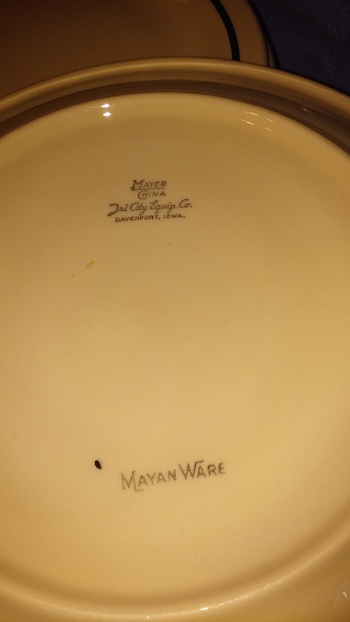 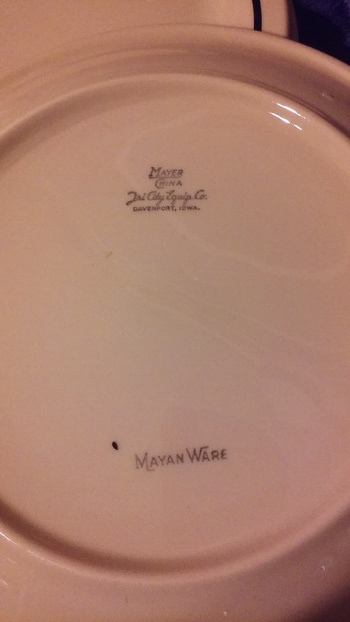 I found these pieces in an abandoned farmhouse in eastern IA about 25yrs ago. (and I've been eating my dinner off of them ever since!) There are eleven matching heavy china plates in all, in (roughly) 9", 7.5", and 6.5" sizes. They are all an unobtrusive beige color (that matches *everything*!) with a single thin black line adorning the rim.

The interesting thing is on their undersides. In addition to the MAYER CHINA and MAYAN WARE trademarks (the exact style of which appears to date the plates to the 1930's - early '40's) they also bear the name "TRI CITY EQUIP. CO. DAVENPORT, IOWA."

MAYER CHINA itself was produced in Beaver Falls, Pennsylvania and it looks like the company eventually became part of Syracuse China in the late 1980's after a long history of its own -- but TRI CITY EQUIPMENT CO. is currently still doing business providing foodservice equipment in Davenport! (which itself is part of an area now known as the "Quad-Cities" of IA and IL, since the 1960's or so - Tri City just never changed their name)

Apparently Tri City must have sold enough Mayan Ware back then to have been able to have their name also added to the dishware, and/or perhaps Tri City even had their own 'custom pattern'...? Mayan Ware was also 'custom produced' for at least *some* of their other customers, including Horn & Hardart Automats. (which can be learned about in the fascinating article about them, elsewhere on CW)