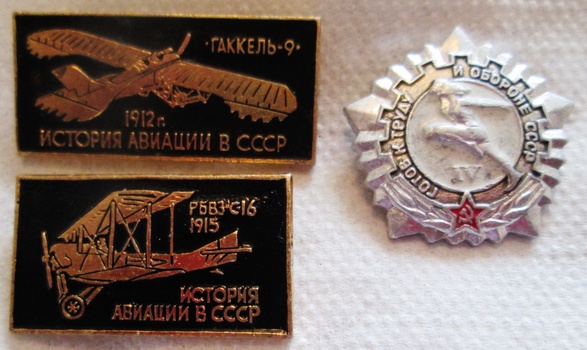 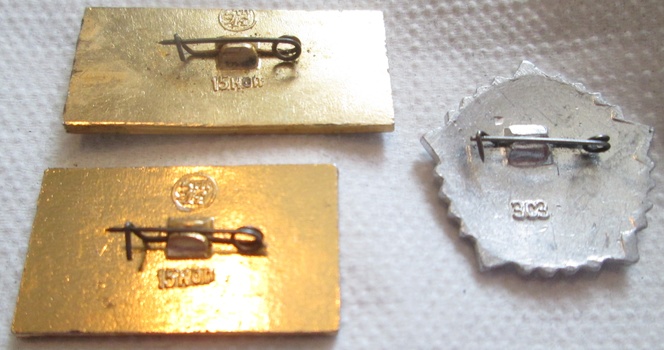 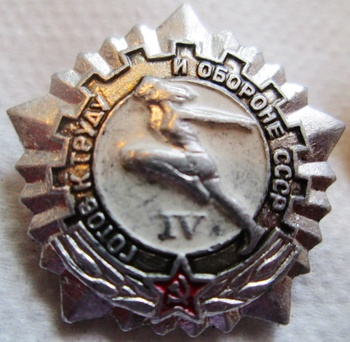 So in one corner of the swap last Saturday was a guy with a bunch of bins full of tangled bits and bobs, amongst which was a small amount of pieces of jewelry, think I paid about three bucks for a handful of stuff, including these pins which I have no clue about. Russian writing, the silver looking one is from the old Soviet Union, and that's about all I can tell you about them. Material is plastic with metallic finishes, metal safety pin style clasps, the long ones are 1 1/2", the round one is 1". I'm assuming they're souvenir pins of some sort. Any information, please share. Thanks for looking.

UPDATE: Okay, it appears the round one has to do with a sports complex that was approved in 1972, there were insignia made for competitors at different age and accomplishment levels; this being the old USSR, the ideological intention of the complex was to put everyone through the system in order to prepare them for work and defense, thus ages ranged from 10 to 60 years of age. IV was for ages 16 - 18, their motto was "Strength and Courage."

UPDATE: Someone who speaks Russian kindly explained "Two badges with airplanes - the inscription "History of Aviation in the USSR", the year of release and the name of the model. "Models "Gakkel-9" in 1912. And the second symbol of the model of 1915 is the name from the abbreviation of the letters RBVZ - S-16. These Soviet icons circa 70-80s.