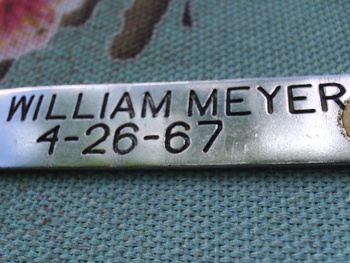 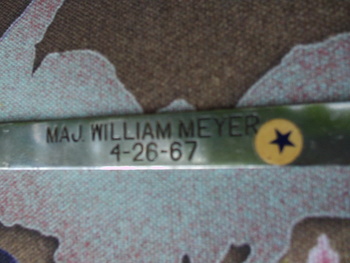 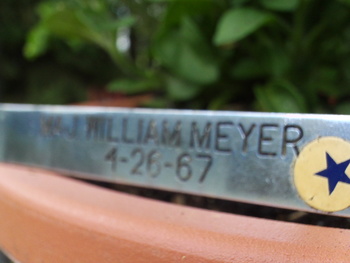 VIETNAM POW MIA MAJ. WILLIAM MEYER USAF
This is a POW / MIA bracelet I wore in the early to mid 70s The blue star was placed on it at the end of the war and means he sadly was still among the MIA I tried to find out on later dates if this was still true but I was unable to find that info however with today's internet and the POW Network who has the full list on line (below)
https://www.pownetwork.org/bios.htm
I can say on Memorial Day to boot that his remains were returned to the United States on 8/14/1985 I laid this on a Michigan pillow for 2 photos as he was from MI
**** From pownetwork.org ****
MEYER, WILLIAM MICHAEL
Remains Returned 850814

Operation Rolling Thunder.
Major William M. Meyer was an F105D pilot dispatched on a mission to destroy a supply bridge near Hanoi on April 26, 1967. During the mission, his aircraft was struck by enemy fire. Meyer went down less than five miles northeast of Hanoi at the city of Yen Vien. There existed the possibility that Meyer safely ejected his crippled aircraft, and he was classified Missing in Action.

Sixteen years later, the Vietnamese "discovered" and returned the remains of John F. Dudash. The U.S. accepted this humanitarian gift without question. Eighteen years after the two F105s were downed.

For nearly two decades, the Vietnamese denied knowledge of the fate of Meyer. Disturbing testimony was given to Congress in 1980 that the Vietnamese "stockpiled" the remains of Americans to return at
politically advantageous times. Was Meyer waiting, in a casket, for just such a moment?

Even more disturbing are over 10,000 reports received by the U.S. relating to Americans missing in Southeast Asia. Many authorities who have examined this information (largely classified), have reluctantly come to the conclusion that many Americans are still alive in Southeast Asia.
**** Apr 30, 2013 ****
US soldier alive in Vietnam 44 years after being declared MIA
Read more: http://www.digitaljournal.com/article/349167#ixzz4iV4XkvNe

**** April 2, 2014 ****
Bodies of three American servicemen found in Cambodia more than 40 years after the end of the Vietnam War
Read more:
http://www.dailymail.co.uk/news/article-2595075/Cambodia-repatriates-3-possible-US-MIA-remains.html#ixzz4iV4wRYqN