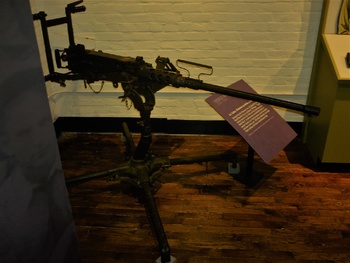 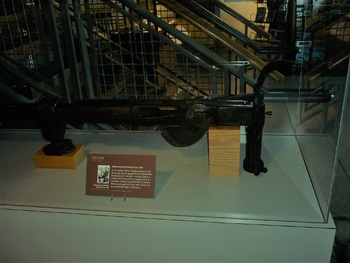 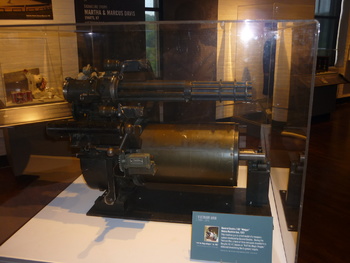 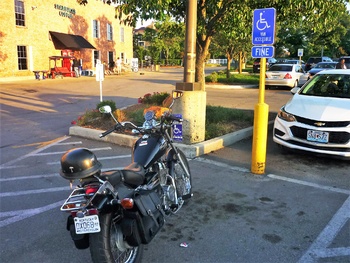 Meanwhile, back at the old Frankfort, KY armoury. 1st we have the Browning M2 .50 cal. rigged for anti- aircraft use.
The 2nd is a Williams Rapid Fire Gun/cannon with an interesting history. Seems that in eastern KY, during the Civil War, the Confederates & Yankees camped a little to close to each other and a Union officer taking a night stroll, found himself at the Confederate camp. He waited for the sentry to dose off & strolled into the camp. He sees this gun on a carriage but knew he couldn't roll the thing out without waking the camp. Instead, he removed the cap squares & carried the 150 lb. barrel & action into the woods & covered it up. When the Yankees later uncovered it, they didn't know what to do with it, so shipped it to the Frankfort Armoury, where it still resides. There were only an estimated 42 made & could fire 60 rds of 1 lb. per minute. Almost the 1st machine gun. It was invented by a Kentuckian for the South.
Then we have a GE prototype mini-gun that I don't think I could mount on my handlebars. Ah! Dreams !
I threw in my latest profile pic. because I doubted that anybody could see the handicap permit on the handlebars in that tiny pic.. Well, I think it's funny and exemplifies my weird humour. I got some great smiles in the parking lot & that made it worthwhile.