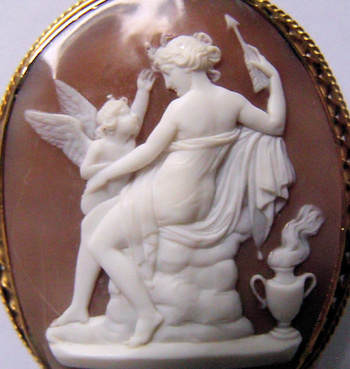 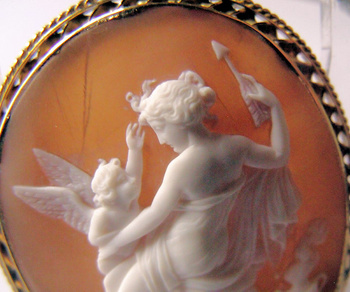 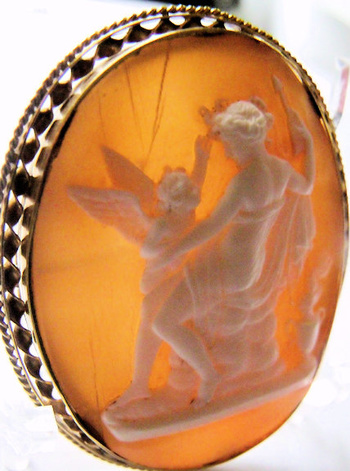 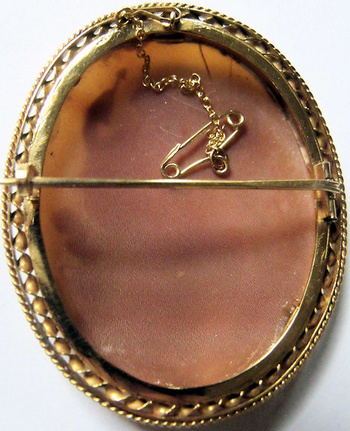 I simply could not resist this large (2 inches x just under 1.5 inches) Victorian helmet shell cameo. The setting is unmarked (tested) 9K gold, with a T hinge, well curled C clasp & a detachable safety chain. I would guess it dates to the 1870s.

The original is a topaz intaglio by Luigi Pichler, youngest of the famed Pichler family of gem engravers. It is known in the literature as 'Venus playing with Cupid.' However, I find the mother's expression so stern, I wonder if this one does not belong with others depicting the 'Disarming of Cupid,': Venus taking away the tools she has given her son to inflame passion after he continues to work mischief with them.

The cameo is extremely faithful to the gem but does differ in a way that must have been meant to accommodate the sensibilities of the day. On the original, Venus is nude right down to her seat; the cameo cutter has given her drapery from the mid-back on down, but made it diaphanous enough that we can still see the outlines of her body. One of the epithets for Venus/Aphrodite is 'callipygous,' meaning having beautiful buttocks. They are on view here.

There is a signature in cursive letters lightly incised into the back, but I have not been able to decipher it. As is so often the case, the signature looks legible until you try to read it. If ever I work it out, will emend this post. (Possibly T Mochi.)

The promised emendation: the name of the cutter is J. Mouhé, who worked in Paris in the mid-nineteenth century.