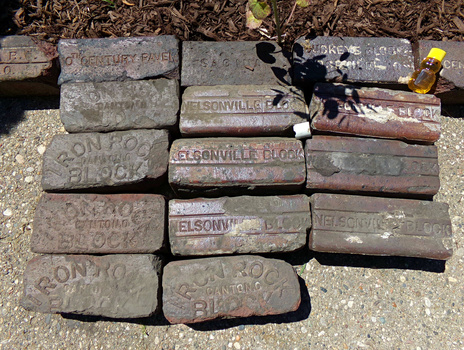 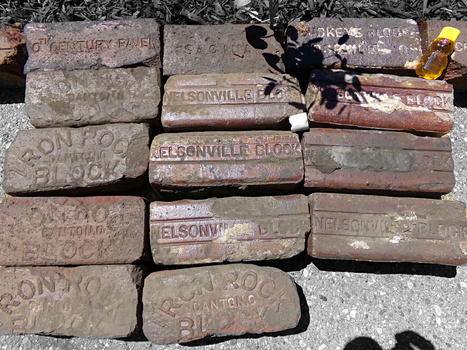 I go to all sorts of lengths to bring these things home. Bike, hiking, kayak, automobile-- doesn't matter, I'll bring as many as I can carry, even if I have 10 of the same brick in better shape. LOL.

For those who don't know, they're early 1900s paver-blocks, which covered most early paved drives and important town-roads. I have finally found intact Iron Rock Blocks, which never seemed to survive well up here.

His surroundings were dusty and dry, as most trainyards tend to be. In the near distance, beige box cars sat where they almost always do on the rusting sidings. Drying grass, pale green, shot up on only one side of the baked clay road cracking under the glaring, hot sun overhead.

He dropped his torn pack as it was becoming heavy-- and he weary, as he had been cycling pretty hard for a few hours before this. His pack would be safe here, as he didn't intend to go much further. After all, he didn't want to risk being caught on railroad property, as it was mid-day, with trucks coming and going by the long building down the way.

Dust filled his nostrils and every line on his hands and knees. It smeared over his arms and legs due to sweat. Moving his wristwatch, he saw the cleaner spot of lighter flesh, albeit it was more sweaty. He was beginning to blend with the aging ties and tracks.

Looking down, he caught site of another one of the objects people don't understand his interest in. Walking toward it, he pulled out of his pocket the metallic object that had been clanking around with his keys.

The wrench caught the gleam of sunlight even under its own layer of light rust and fine dust-- dust, from the cracked, shattered, clay-dirt, covering everything down here.

He fell to his knees and plunged the wrench into the clay beside the object. Wondering what people who might see him were thinking, he began digging away with the only tool he had-- he didn't intend to come out here. This happened to be in his pack, and memory of the location crossed his mind. So, on the way home from another town, he stopped by.

Now he was prying out antique pavers from an old, worn-out road in a train-yard he walked through earlier that year. They weren't of monetary value, but he enjoyed lining the gardens with these historical objects. Most were pretty well lodged, barely visible corners or sides peeking up to take on the driving rains and burning sun as they had for the past century.

I ended up taking home all these, making two trips total to my car, as my pack could only hold 6 at a time (carried in my arms. I'm sure the people at the boat launch where I parked, thought I was most suspicious.)

I have 4 (not from this pile) in my room as very-good-condition interesting displays, including a mottled-glaze Nelsonville. The Nelsonvilles seem to have a metallic glaze that sometimes has colours in it.

I think that I have 4-dozen pavers. As each weighs a helluva lot, having brought them home via kayak, hiking, or cycling..... LOL. Yes, I sometimes have a kayak with, like, 5 or 6 of these in it.

Of interest, 90% of the bricks I find here, were made in Ohio. I'm in Michigan. We have Michigan bricks, but most were from Ohio-- specifically, Canton.