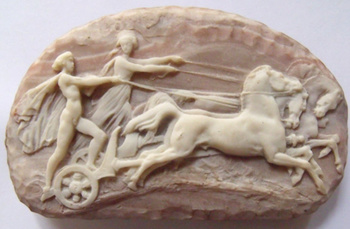 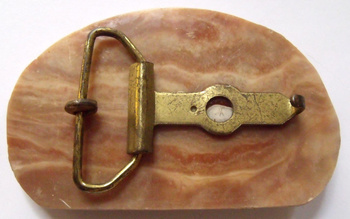 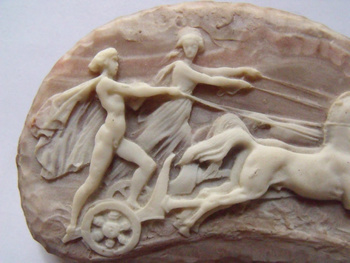 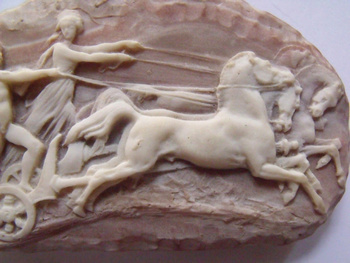 This does not really belong under Fine Jewelry, but since that is the only category with a sub-category for cameos, here it is.

At 4 inches by 2.5 inches, with the look of rough-hewn stone, this hefty buckle would be fit for the best Good Ol' Boy. If he had a taste for neoclassical imagery. The scene here does not make much mythological sense: the foreground charioteer follows the conventions for depicting Apollo; his female companion/competitor has somewhat the look of Nike/Victoria. As the God of the Sun and of the Arts, chariot racing is not really Apollo's thing. When he sets out on wheels, it is in the stately 4-horse quadriga of the sun, not a sports biga. Maybe it's his day off? Or does he drag race at night?

This has lost any tag it may once have had, but the material, the background resembling marbled stone with the applied white figures, and the modeling are consistent with the work of Incolay Studios, either the original firm or early in its reincarnation. It differs from most Incolay pieces in that the front surface has been treated to be grainy and matte.

Incolay was established in California in the 1960s by an inventor husband who specialized in polymers (among his patents is one for a diving board) and an artistic wife. The husband came up with a substance that could be molded and stay plastic at a fairly low temperature and would stick to itself, so that the separately formed figures adhere to the background without a perceptible seam. After a way was devised to color it using pulverized stone, Incolay Stone was born. They hired artists who both replicated 18th century engraved gems and created original compositions in the same style. The men's jeweler Dante used Incolay cameos in its Museum Masterpiece line.

The buckle posted by EDM_KC strikes me as being similarly made, but I think not by Incolay. Some of the Dante cufflinks use cameos that follow some steamy gems, but most do not celebrate the lone female nude.