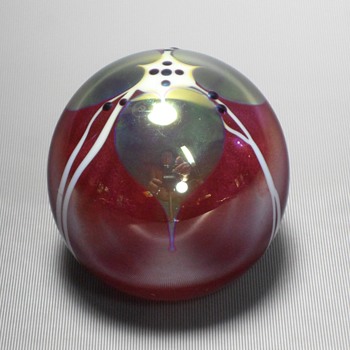 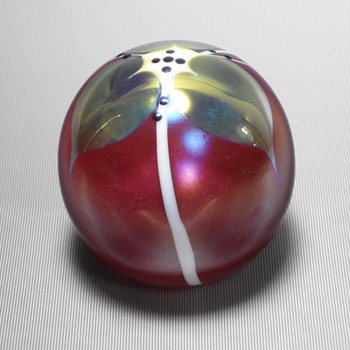 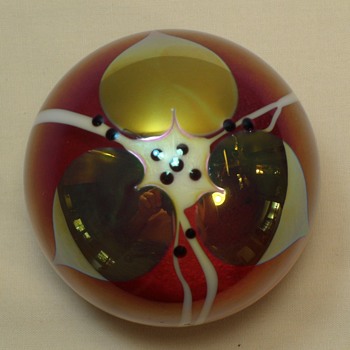 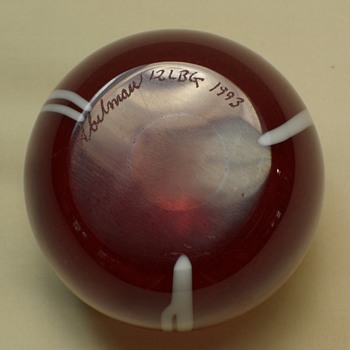 Here is a nice paperweight From Stuart Abelman Art Glass. Made in 1993 and signed. It's called "Favrile Leaf Berry Motif", measures 2 1/4".

Below are some words about Stuart Abelman, taken from his website AbelmanArtGlass.

After several years as a college instructor, Stuart realized that although he loved teaching, he did not have the time to create in glass all of the ideas he found himself sketching constantly. Stuart had always drawn and doodled on any available scrap of paper since he was very young. As he grew older this even included drawing borders on his college exam papers, but now he found himself drawing ideas for glass on paper napkins in restaurants and on airplane flights. It was time to start his own studio, so in 1977 Stuart left teaching and started Abelman Art Glass.

Stuart spent much of this year building his studio: Furnaces, pot furnaces, glory holes, annealing ovens, glassblower benches, etc... and in 1977 the first furnace was lit at the Abelman Art Glass studio in Southern California.

Although glassblowing was one of Colonial America's first industries, and it enjoyed great popularity during the Art Nouveau period in the late 1800's, hand blown art glass had all but disappeared from the American art scene until the 1970's. Stuart Abelman was one of a select group of pioneering studio glass artists who saw the magic and challenge in glass and set about taking the medium further than ever before.

Stuart uses his own formulas and the finest silica sand to ensure the purest quality glass possible. Each piece is made entirely of hot molten glass and is worked and completed at the furnace. All the colors and design patterns are formed from the hot glass. No paint is used. Many of the beautiful colors are made with gold, silver and other precious metals.

Stuart's glass pieces are shown in galleries and museums around the world and have become permanent additions to museum, private and celebrity collections here and overseas. His piece in the permanent collection of the Corning Museum is particularly notable for its infusion of life into a figurative sculpture in glass. Stuart Abelman was first to bring figurative sculpture to hand blown glass in the new art glass studio movement in the United States in the late 1960's and early 1970's. It was a hard sell back then but has become an established form of expression in the current art glass arena. Many glass artists now express themselves through figurative sculpture.

Abelman's early work in figurative sculpture led to his studio production of the unicorn which was chosen for the American Express Catalog in the 1980's. Its success allowed him to expand his artistic endeavors in this area and led to his reptile and amphibian work. During these same years Stuart wanted to find another way to breathe life into glass in a way that would touch everyone, glass collector or not. The result of this desire was the series of Limited Edition Clowns which are much sought after. Nancy Bingham, an American authority on Murano clowns put Stuart Abelman's clowns into her second book for private Murano clown collectors because of their uniqueness, level of difficulty and artistic expression. Stuart is currently designing the fortieth limited edition clown.

Stuart also produces a series of exquisite Christmas ornaments that have graced the cover of Sunset Magazine as well as the White House tree. Stuart has journeyed through so many new frontiers in the American hand blown art glass studio movement including extensive commission work for the movie and entertainment industry and was once heard to say, "I have been working with hot glass for over thirty-five years and I am certain it runs through my veins."