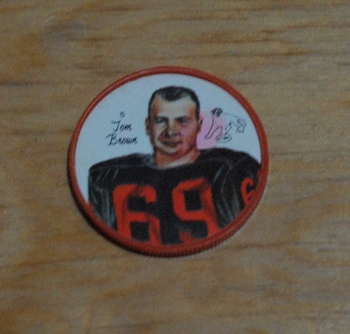 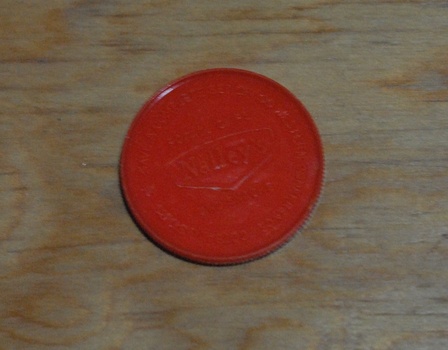 The Canadian Football League has always been a smaller collector market, NHL cards, plastic coins were of much more interest to young Canadian boys, although in the last few years interest has grown with many more sports collectors showing more collecting interest in CFL memorabilia.
Pictured here are 5 of the 100 Nalleys Potato Chips round 3.5cm./1.4"
from 1964. The set only includes the 5 Western Canadian Teams with 20 coins per Team: British Columbia Lions (numbers 1-20), Calgary Stampeders (numbers 21-40), Edmonton Eskimos (numbers 41-60), Saskatchewan Roughriders (numbers 61-80), and Winnipeg Blue Bombers (81-100). The set features 18 Hall of Famers including Joe Kapp and Harold Bud Grant.
This was the second year CFL coins were introduced being inserted into bags of Nalleys Potato chips. The 1963 set was larger then the 1964 set as all 8 teams were included 20 coins per team. There were also plastic shields produced which could be ordered from the company. Many people didn't order the shields which only makes them very collectible today.