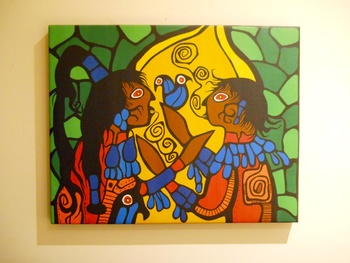 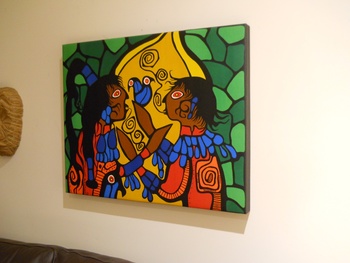 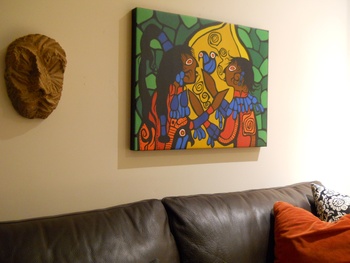 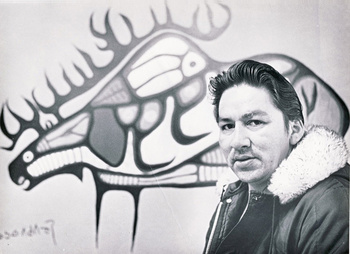 I have this original piece of Norval Morisseau, since 1975, found it in an antique store downtown Quebec City, i have hang in my living room for my last 3 house, alway's enjoy deeply this beautiful piece of Morisseau, of course when we buy it, the artist was not as acclaim like today, so we pay very cheap at the time, but today it's different story, big tag assurance on this piece.

The last picture is the artist in 1968, courtesy of https://www.aci-iac.ca/norval-morrisseau/technique-and-style

Norval Morrisseau (1931–2007) is considered by many to be the Mishomis, or grandfather, of contemporary Indigenous art in Canada. His life has been sensationalized in newspapers and documentaries while his unique artistic style has pushed the boundaries of visual storytelling. The creator of the Woodland School of art and a prominent member of the Indian Group of Seven, Morrisseau is best known for using bright colours and portraying traditional stories, spiritual themes, and political messages in his work.

Anishinaabe artist Norval Morrisseau was born in 1931 at a time when Indigenous1 peoples in Canada were confined to reserves, forced to attend residential schools, and banned from practising traditional ceremonial activities.2 He was the oldest of five children born to Grace Theresa Nanakonagos and Abel Morrisseau, and, in keeping with Anishinaabe tradition, he was sent to live with his maternal grandparents at Sand Point reserve on the shores of Lake Nipigon, Ontario. There, Morrisseau learned the stories and cultural traditions of his peoples from his grandfather Moses Potan Nanakonagos, a shaman trained within the Midewiwin spiritual tradition. From his grandmother Veronique Nanakonagos, he learned about Catholicism.

At age six, Morrisseau was sent to a residential school, part of an education system set up by the Canadian government in the 1880s. Residential schools, which operated until the last decades of the twentieth century, forcibly separated Indigenous children from their families and forbade them from acknowledging their cultures or speaking their traditional languages. At St. Joseph’s Indian Residential School in Fort William, Ontario, Morrisseau faced sexual and psychological abuse that left him with deep emotional scars. After two years at St. Joseph’s, and two more at another nearby school, he returned to Sand Point to attend a public school in nearby Beardmore.

Morrisseau left school at age ten because, according to curator Greg Hill, “Morrisseau was not like other children in his community. The young artist preferred to spend his time in the company of elders listening and learning, or completely alone, drawing.”4 Morrisseau was interested in local petroglyphs and birchbark scroll images, but never received any formal art training. He wanted to draw things he had heard about or seen—like the sacred bear that had come to him in a vision quest, or spirit-beings such as Micipijiu or Thunderbird that were drawn on cliffs—but community members and relatives discouraged him, as Anishinaabe cultural protocols forbid the sharing of this ceremonial knowledge. When he was not drawing, Morrisseau spent time fishing, hunting, trapping, picking berries, and holding pulpwood-cutting and highway-construction jobs. In his early teens, he also began drinking alcohol.

When he was nineteen, Morrisseau became critically ill. His family arranged a healing ceremony, during which he received the name “Miskwaabik Animiiki” (Copper Thunderbird). Morrisseau explained, “That was a very, very powerful new name; and it cured me.”5 When he was about twenty-three, however, Morrisseau became sick with tuberculosis and was sent to a sanatorium in Fort William. There he met Harriet Kakegamic, a fellow patient from the remote northern Cree community of Sandy Lake reserve. They married in the late 1950s and lived in Beardmore, where Morrisseau began to devote more time to his art. He painted on birchbark baskets made by his mother-in-law, Patricia Kakegamic, and on other objects.

Like many young artists, Norval Morrisseau did not earn enough on which to live. Around 1958, he found a job at a gold mine and moved with Harriet to Cochenour, near Red Lake, Ontario. There he met Dr. Joseph Weinstein, a doctor who had trained as an artist in Paris, where he had developed ties to the European modern art scene. Joseph’s wife, fellow artist Esther Weinstein, recalled a visit to McDougal’s, the local general store, where “to my surprise, I saw those two very unusual paintings [including Untitled (Thunderbird Transformation), c. 1958–60] standing on the floor.” Esther Weinstein asked the store proprietor, Fergus McDougal, to invite the artist to visit their home.6 Untitled, c. 1958, from that same period, may be the second painting to which she was alluding.

When Morrisseau knocked on the Weinsteins’ door a few days later with paintings to sell, the couple quickly welcomed him, and he spent many hours reading their art books and discussing art with them. Art historian Ruth B. Phillips notes that Dr. Weinstein supplied Morrisseau with high-quality art supplies, such as paper and gouache paints, and encouraged him to consider himself a professional artist “in the Western sense, rather than as a producer of tourist souvenirs.”7 This chance alliance between an Indigenous man and a cosmopolitan couple clearly introduced Morrisseau to a wider understanding of art, which inspired him.8

Morrisseau’s early work was also championed by Selwyn Dewdney, an anthropologist and artist who was recording pictograph sites in the area. In 1960, local police constable Bob Sheppard, who was stationed on McKenzie Island, near Cochenour, wrote to his friend Dewdney and suggested that he meet Morrisseau. The two were introduced in 1960, and, like the Weinsteins, Dewdney shared with Morrisseau his interest in modern art, includingMexican mural painting by Diego Rivera (1886–1957), Surrealist art by Salvador Dalí (1904–1989), and works by such artists as Pablo Picasso (1881–1973) and Henri Matisse (1869–1954). Unlike the Weinsteins, however, Dewdney initially encouraged Morrisseau to work in traditional media like birchbark and leather, though he also supported the artist’s early experimentation in oils.9 He also likely pushed Morrisseau to sign his work in Cree syllabics, an alphabet Morrisseau had learned from his wife.10 Morrisseau in turn shared his cultural knowledge of rock art with Dewdney, who studied and wrote on the subject. Their correspondence offers insight into Morrisseau’s aim to educate Canadians about Indigenous art and culture. Later, Dewdney urged Morrisseau to record a series of stories explaining the images in his art, which resulted in a book edited by Dewdney entitled Legends of My People: The Great Ojibway.