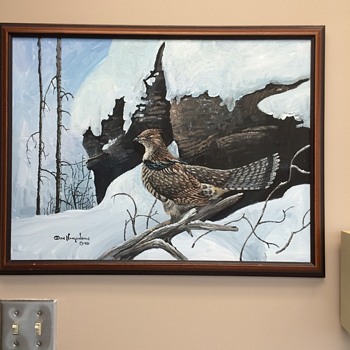 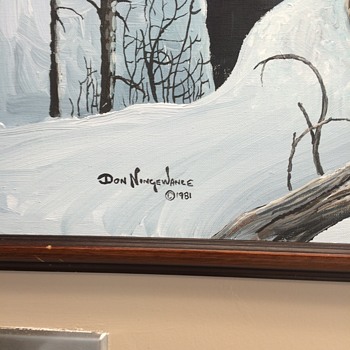 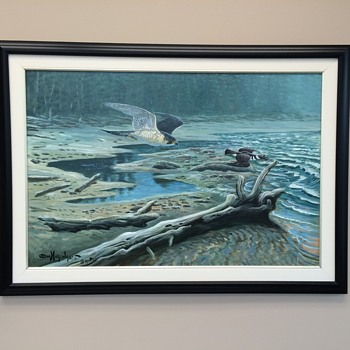 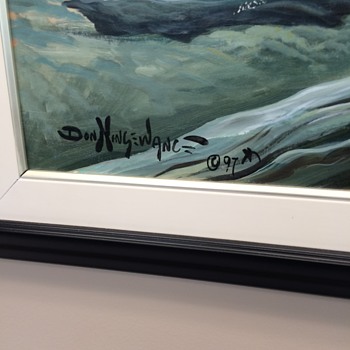 This is 2 more Oil painting from my collection, those 2 are in my office in the basement.
I found it quite a while ago at my local thrift shop, they arrived both together, so they stay together,LOL, one is early 1981 and the other much recent 1997, both are oil on canvas, one depicted a "Ruffed Grouse" and "Peregrine Falcon hunting a Kildir"
Very realist painting by a very talented Canadian native artist, very good investment at the thrift store price, i love it.

Ojibwa artist, Don Ningewance, was born on June 24, 1948, on the Lac Seul First Nation in Northwestern Ontario, Canada. His early years were spent in much the same way as most remote native youths in the 1950s who learned their traditional ways, and spent much of their time outdoors fishing, hunting, and trapping. He was Band Administrator for the Lac Seul First Nation from 1970 until 1982, at which time he left that job to paint full-time.
Don is a very versatile artist. While he has no formal education in art, he seems to possess an uncanny ability to paint what he sees in great detail. Although he uses oils and watercolours on occasion, his preferred medium is acrylic on canvas as it dries quickly, allowing him to apply thin layers of paint to create different effects with his colours and textures. Don is primarily a realist artist, but he has also done paintings of the legends of his people. His sensitive eye for colour, light and texture can be readily seen in his beautiful renditions of landscapes highlighting the nuances of the changing seasons and his lifelike wildlife amidst the rugged beauty of the Canadian Shield with its boreal forests and many water systems. Don has a style that is uniquely his own like so many of the Woodlands artists living in the area around the Great Lakes.
In addition to selling his originals and limited edition prints, Don has designed placemats for Alex Wilson Coldstream which have been distributed worldwide. In the 1980s, he exhibited his art through the Sidebottom Galleries in Winnipeg, Manitoba. In the mid-1980s, Ducks Unlimited commissioned him to do two paintings of waterfowl which they made into prints. In 1992, he was commissioned to do a series of six plates featuring wolves for the Bradford Exchange. As well, he has done covers for magazines, such as “Sioux Lookout A Northern Experience,” “Tawow” a native magazine once published by the Department of Indian and Northern Affaires, and for several Annual Reports for Metalore Resources Limited. He has had showings in Victoria, British Columbia, Calgary, Alberta, Winnipeg, Manitoba, and Thunder Bay, Ontario. He also participates in Trade Shows and Art Festivals around the region. His work can be seen on the Yessy Art Gallery website. His paintings are very desirable due to their subject matter, and can be found in many private and corporate collections throughout Canada and abroad.