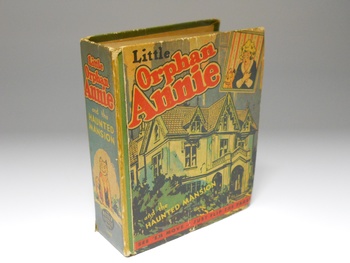 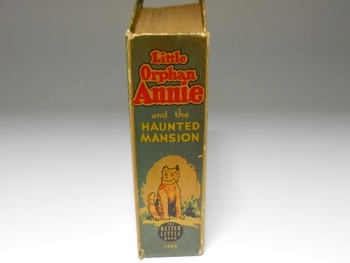 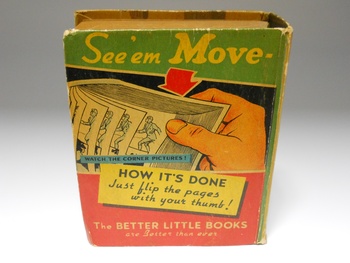 You can look for a while to find this Iconic Annie periodic comic book, i see many on the Internet, but not really in this fine condition.
I found this little book at my local thrift shop on Monday, on the right corner of the book when you flip the pages on your finger Annie move very nicely and become animated, this is kind of very cool.

Little Orphan Annie was a daily American comic strip created by Harold Gray and syndicated by the Tribune Media Services. The strip took its name from the 1885 poem "Little Orphant Annie" by James Whitcomb Riley, and made its debut on August 5, 1924, in the New York Daily News.

The plot follows the wide-ranging adventures of Annie, her dog Sandy and her benefactor Oliver "Daddy" Warbucks. Secondary characters include Punjab, the Asp and Mr. Am. The strip attracted adult readers with political commentary that targeted (among other things) organized labor, the New Deal and communism.

Following Gray's death in 1968, several artists drew the strip and, for a time, "classic" strips were reruns. Little Orphan Annie inspired a radio show in 1930, film adaptations by RKO in 1932 and Paramount in 1938 and a Broadway musical Annie in 1977 (which was adapted into a film of the same name three times, one in 1982, one in 1999 and another in 2014). The strip's popularity declined over the years; it was running in only 20 newspapers when it was cancelled on June 13, 2010. The characters now appear occasionally as supporting ones in Dick Tracy.

Annie is a 10-year-old orphan. Her distinguishing physical characteristics are a mop of red, curly hair, a red dress and vacant circles for eyes. Her catchphrases are "Gee whiskers" and "Leapin' lizards!" Annie attributes her lasting youthfulness to her birthday on February 29 in a leap year, and ages only one year in appearance for every four years that pass. Annie is a plucky, generous, compassionate, and optimistic youngster who can hold her own against bullies, and has a strong and intuitive sense of right and wrong.
Sandy enters the story in a January 1925 strip as a puppy of no particular breed which Annie rescues from a gang of abusive boys. The girl is working as a drudge in Mrs. Bottle's grocery store at the time and manages to keep the puppy briefly concealed. She finally gives him to Paddy Lynch, a gentle man who owns a "steak joint" and can give Sandy a good home. Sandy is a mature dog when he suddenly reappears in a May 1925 strip to rescue Annie from gypsy kidnappers. Annie and Sandy remain together thereafter.

Oliver "Daddy" Warbucks first appears in a September 1924 strip and reveals a month later he was formerly a small machine shop owner who acquired his enormous wealth producing munitions during World War I. He is a large, powerfully-built bald man, the idealized capitalist, who typically wears a tuxedo and diamond stickpin in his shirtfront. He likes Annie at once, instructing her to call him "Daddy", but his wife (a plumber's daughter) is a snobbish, gossiping nouveau riche who derides her husband's affection for Annie. When Warbucks is suddenly called to Siberia on business, his wife spitefully sends Annie back to the orphanage.

Other major characters include Warbucks' right-hand men, Punjab, an eight-foot native of India, introduced in 1935, and the Asp, an inscrutably generalized East Asian, who first appeared in 1937. There was also the mysterious Mister Am, a friend of Warbucks' who wore a Santa Claus–like beard and was of a jovial personality. He claimed to have lived for millions of years and even had supernatural powers. Some strips hinted that he may even be God.

After World War I, cartoonist Harold Gray joined the Chicago Tribune which, at that time, was being reworked by owner Joseph Medill Patterson into an important national journal. As part of his plan, Patterson wanted to publish comic strips that would lend themselves to nationwide syndication and to film and radio adaptations. Gray's strips were consistently rejected by Patterson, but Little Orphan Annie was finally accepted and debuted in a test run on August 5, 1924, in the New York Daily News, a Tribune owned tabloid. Reader response was positive, and Annie began appearing as a Sunday strip in the Tribune on November 2 and as a daily strip on November 10. It was soon offered for syndication and picked up by the Toronto Star and The Atlanta Constitution.

Gray reported in 1952 that Annie's origin lay in a chance meeting he had with a ragamuffin while wandering the streets of Chicago looking for cartooning ideas. "I talked to this little kid and liked her right away," Gray said, "She had common sense, knew how to take care of herself. She had to. Her name was Annie. At the time some 40 strips were using boys as the main characters; only three were using girls. I chose Annie for mine, and made her an orphan, so she'd have no family, no tangling alliances, but freedom to go where she pleased.

In designing the strip, Gray was influenced by his midwestern farm boyhood, Victorian poetry and novels such as Charles Dickens's Great Expectations, Sidney Smith's wildly popular comic strip The Gumps, and the histrionics of the silent films and melodramas of the period. Initially, there was no continuity between the dailies and the Sunday strips, but by the early 1930s the two had become one.The strip (whose title was borrowed from James Whitcomb Riley's 1885 poem "Little Orphant Annie") was "conservative and topical", according to the editors of The Great Depression in America: A Cultural Encyclopedia, and "represents the personal vision" of Gray and Riley's "homespun philosophy of hard work, respect for elders, and a cheerful outlook on life". A Fortune popularity poll in 1937 indicated Little Orphan Annie ranked number one and ahead of Popeye, Dick Tracy, Bringing Up Father, The Gumps, Blondie, Moon Mullins, Joe Palooka, Li'l Abner and Tillie the To drop the sequence and develop another adventure.
-----------------------------------Gray's death---------------------------------------

Leonard Starr's Little Orphan Annie, Gray died in May 1968 of cancer, and the strip was continued under other cartoonists. Gray's cousin Robert Leffingwell was the first on the job but proved inadequate and the strip was handed over to Tribune staff artist Henry Arnold and general manager Henry Raduta as the search continued for a permanent replacement. Tex Blaisdell, an experienced comics artist, got the job with Elliot Caplin as writer. Caplin avoided political themes and concentrated instead on character stories. The two worked together six years on the strip, but subscriptions fell off and both left at the end of 1973. The strip was passed to others and during this time complaints were registered regarding Annie's appearance, her conservative politics, and her lack of spunk. Early in 1974, David Lettick took the strip, but his Annie was drawn in an entirely different and more "cartoonish" style, leading to reader complaints, and he left after only three months. In April 1974, the decision was made to reprint Gray's classic strips, beginning in 1936. Subscriptions increased.

Following the success of the Broadway musical Annie, the strip was resurrected in 1979 as Annie, written and drawn by Leonard Starr. Starr, the creator of Mary Perkins, On Stage, was the only one besides Gray to achieve notable success with the strip.

Upon Starr's retirement in 2000, he was succeeded by Daily News writer Jay Maeder and artist Andrew Pepoy, beginning Monday, June 5, 2000. Pepoy was eventually succeeded by Alan Kupperberg (2001–2004) and Ted Slampyak (2004–2010). The new creators updated the strip's settings and characters for a modern audience, giving Annie a new hairdo and jeans rather than her trademark dress. However, Maeder's new stories never managed to live up to the pathos and emotional engagement of the stories by Gray and Starr. Annie herself was often reduced to a supporting role and was a far less complex character than the girl readers had known for seven decades. Maeder's writing style tended to make the stories feel like tongue-in-cheek adventures compared to the serious, heartfelt tales Gray and Starr favored. Annie gradually lost subscribers during the 2000s, and by 2010, it was running in fewer than 20 U.S. newspapers.