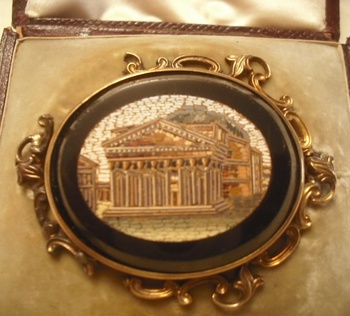 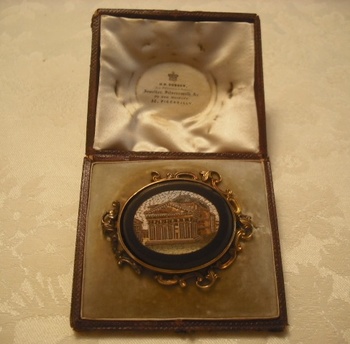 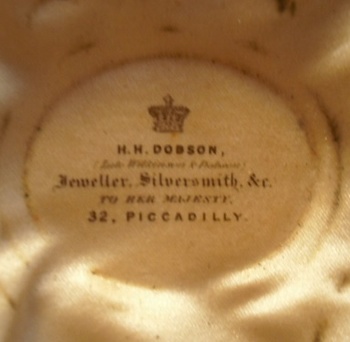 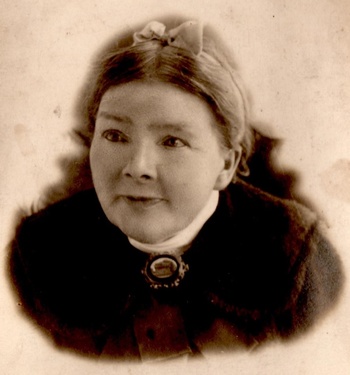 This is one of my mother’s greatest treasures. It had been my great-great-grandmothers. It has been passed along from mother to eldest daughter until it reached my mother. There is a bit of a problem at this point since my mother had no daughters and there are no grandchildren, but one thing is sure – it will stay in the family. That last image is of my great-great-grandmother wearing the broach.

The image of the building is incredibly detailed. From what I’ve read online, these “micro-mosaics” were a popular style back then with the Victorian tourist trade in Italy, and Italian antiquities were a common subject. Eventually English craftsmen began making them. Until recently I believed that the black stone was onyx, but then I read that black Derbyshire marble was frequently used. I’ve no idea how the two stones compare, but the stone in the broach is completely black and has a high luster.

The family legend is that when my great-great-grandmother was a young woman, she was part of the household staff of an earl who had a sickly wife. My ancestor’s job was to care for the woman, which she did with great compassion. When the Lady passed away, the earl gifted this broach that had belonged to his wife in appreciation. I have no idea how plausible that story is, given the relationship between English peers and the staff of the manors during the Victorian period, but there you have it.

Another story is about the missing fragments of gold filigree. My great grandmother wore the broach on her shawl when she went to church. The pieces that broke off were from the repeated tossing of her shawl back over the church pew.

My grandmother tried to have the gold filigree fixed in the 1950s, but the jeweler could not match the gold correctly, and a close examination of the left portion of the frame shows the attempt at repair.