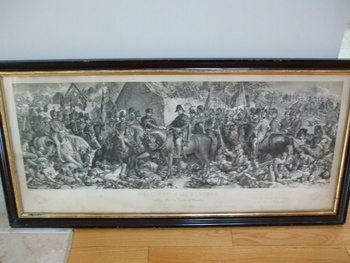 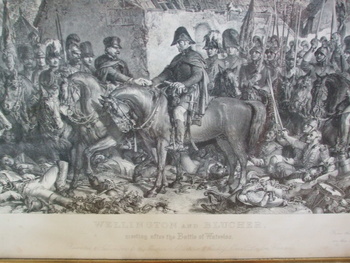 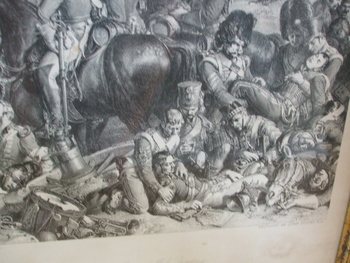 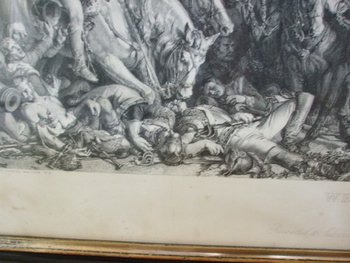 CW member and friend "vetraio50" uploaded some quite interesting post cards a year ago that showed up again this morning depicting scenes from and after the battle of Waterloo.
In the late 60's, I attended an auction in Toronto, Canada where this large and old Engraving was offered for sale. Since I had always been interested in the exploits of Napoleon, I bid on it and was successful. The engraving which measures almost 36" by 16" depicts Wellington and Blucher meeting after the battle of Waterloo near an inn called "A La Belle Alliance" which was located a few miles south of Brussels, Belgium. Wellington wanted to thank Blucher for joining the battle after Wellington was being pushed back by Napoleon's army. Blucher's Prussian army provided the extra help that turned the tide of the battle and eventually defeated Napoleon's army.
Blucher suggested that this major battle be called the battle of "La Belle Alliance" to commemorate the alliance of a coalition consisting of Britain, Russia, Prussia, the Netherlands, Sweden, Austria, Spain, Portugal, Sardinia and other Germanic States who had all joined the fight that had just occurred at Waterloo.
The engraving provides in detail a Panoramic view of the carnage and death at the battle of Waterloo.