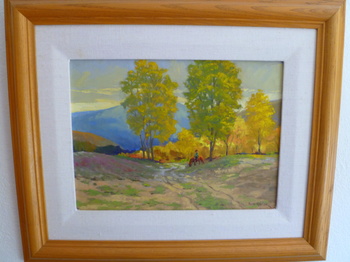 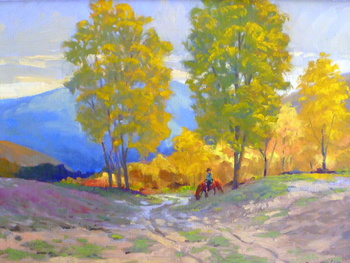 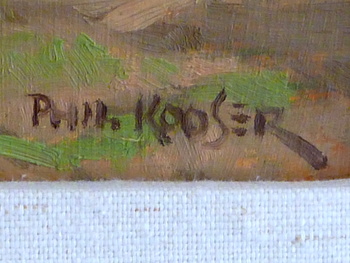 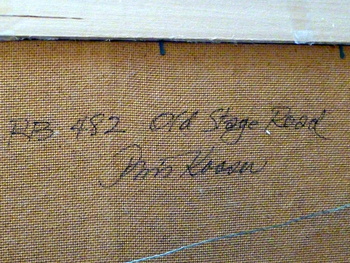 This painting by Phil Kooser is one of my favorites in our collection of paintings.
My husband and I bought the painting - original oil on board (12"x 16") - called - "Old Stage Road" at an auction in Calgary in 1982. I do not know when it was painted.
At that time, because of world oil prices, Calgary was going through a major economic downturn. Small oil companies were forced to liquidate their assets by selling them in auctions and this is how we became the new owners of this painting. The auctioneers did not provide any information. All they were interested in - was to sell and sell fast.
Since that time, I learned that:
Phil Kooser
Born: 1921 - Ames, Iowa
Died: 2007 - Yakima, Washington
Known for: landscape, western genre
The following information is available on an Auction House website and it comes from his son Greg:
Phil Kooser was born in Ames, Iowa in 1921 with a passion for art. He was raised in Ames and attended Iowa State University and the Cumming School of Art in Des Moines. His education was interrupted by World War II, when he served in the Army Engineers, building bridges in what was then Burma and India. Following the war he returned to Iowa, where he married Esther Knotts in 1946. They moved to Chicago where he attended the Chicago Academy of Fine Arts. After graduation he and Esther lived in Chicago while he worked in the art department of an advertising agency.
Phil fell in love with Yakima when he trained at the Yakima Firing Range during the war and in 1950 he and Esther moved first to Wenatchee, then to Yakima, where he became a partner with Walter Graham in a commercial art studio. For the next 25 years he worked as a commercial artist and was responsible for many works of public art, including works in metal sculpture, wood carving, murals and more. Probably his most familiar local pieces were the fountain at the Yakima Mall at 4th and Yakima (now gone), the sculptures at Yakima Valley College in the outdoor arts arena, and the wall sculptures inside the Wells Fargo Bank at 101 E. Yakima. As his business and reputation grew, so did his family: he and Esther had 2 sons, Lindsay and Greg. In his career he was an active part of the business community: a member of the Elks, a member (and President) of the Chamber of Commerce, and he worked with the Visitors and Convention Bureau.
In 1978 he retired from commercial work to dedicate himself to painting. He painted almost daily, often outdoors, capturing the light as it moved across the landscape. He enjoyed changes of scenery and painted at the Grand Canyon, along the California coast and in Canada. But his favorite subjects were the hills around Yakima, and he painted many with the heritage of this area in mind. Most notable are "The Moving of Yakima" (a representation of the city's move from Union Gap to its current location in 1885) and "Celilo Falls" (a depiction of the Indian fishing grounds inundated by the Dalles Dam in 1957), both of which are in the collection of the Yakima Valley Museum. He was also an active contributor to the Toppenish Murals and designed and directed the painting of the very first mural "Clearing the Land". He designed and directed several more, including "Rhythms of Celilo" which he painted with good friend Jack Fordyce. He also painted posters for the Yakima Air Fair, the Yakima Symphony and many other local events. Phil was generous with his art, often donating the original painting of the poster to the event for further fund-raising purposes and donating many pictures of local historical interest to the Yakima Valley Museum for their collection. His paintings earned him a show at the Frye Museum in Seattle in 1982 and the Yakima Valley Museum in 2002 as well as numerous shows in prominent galleries up and down the west coast.
He continued painting until his sight failed from the diabetes he fought from middle age on. Phil was a wonderful man: keenly intelligent with a quick wit, a great sense of humor and a great humanity. His wife Esther died in 1999. Phil died on March 6, 2007 at Landmark Care Center.