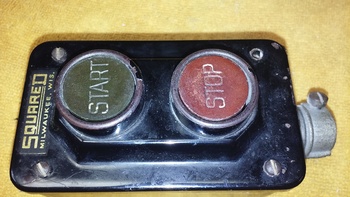 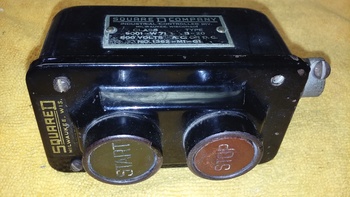 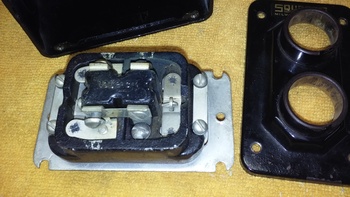 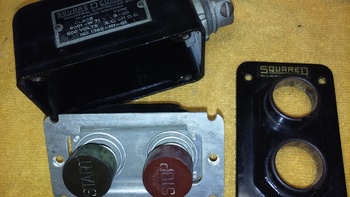 Here's the first of another subset of my 'electrical gizmos' collection -- "STOP/START STATIONS". Used in an extensive variety of applications, switch combinations such as this were and still are made by many manufacturers, and are commonly found controlling all kinds of large electrical motors and machinery in all manners of industrial settings like factories and boiler rooms, not to mention many other places where any odd 'big electric thing' needs to be operated 'at the push of a button'.

Electrically, both pushbuttons are springloaded and operate separate (and different) actual sorts of switch contact sets behind them, which in turn get wired to other componentry which actually turns the 'big thing' on or off. But enough of the 'electrical theory 101' lesson, more important here is that it measures roughly 4-1/2" h by 2-1/2" w by 3"d.

This particular example was produced by the "Industrial Controller Division" of SQUARE D COMPANY, Milwaukee WI. I can date it to the mid 1920's or so due to recollection of the (remains of the) machine I rescued it from, a few years ago now too.