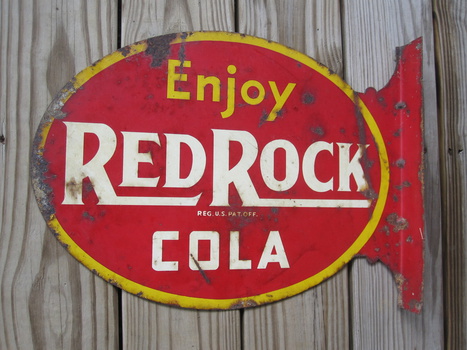 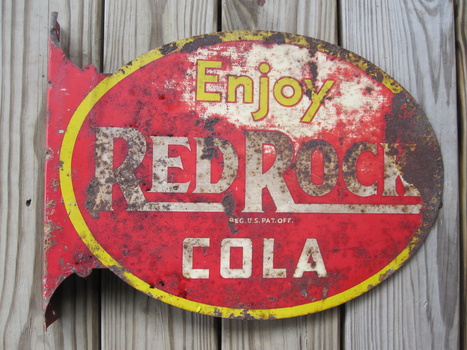 Hey everybody,
I bought this Sign a couple of weeks ago with some other stuff from a Guy her in Kentucky. It is a Tin Flange Sign my guess is out of the 40's! I really love the sign so i checked the internet to figure more out about it but i can't find anything .The only thing what i found about the Company is this.

The Red Rock Company was founded in 1885 by Lee Hagan and G. T. Dodd of Atlanta, Georgia. Dodd initially introduced ginger ale as the company's first product, which became popular in the Southern U.S. By 1938, Red Rock was an early leader in the distribution of carbonated beverages, distributing 12-ounce bottles by way of a distribution network of 200 bottlers. By 1947, Red Rock products were bottled in 47 of the 50 U.S. states but by 1958, the company's success began to decline.After the 1950s, the Red Rock Company seemed to vanish entirely and it is unknown when the company disestablished. The formulas for Red Rock's carbonated beverage products did survive and are now owned by Sensient Technologies of Indianapolis, Indiana, which has its own network of distributors. [1] Clayton Distributors of Atlanta is a major distributor of Red Rock branded ginger ale and cola.

So my question is did anybody knows, how old this Sign is or what the value its or how much they produced???
I'm happy over any answer and when you got question feel free to contact me. Thanks in advance