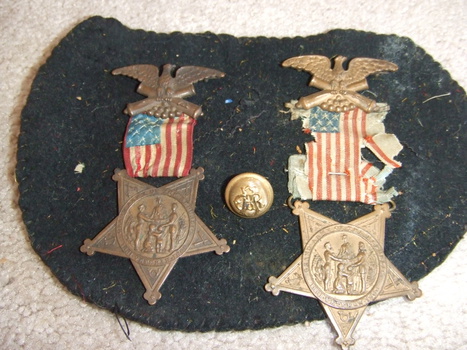 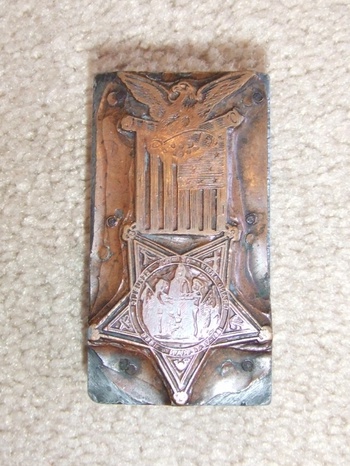 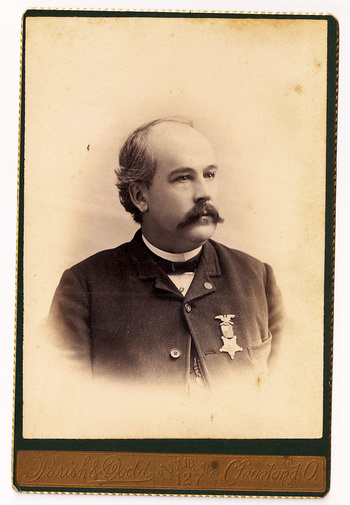 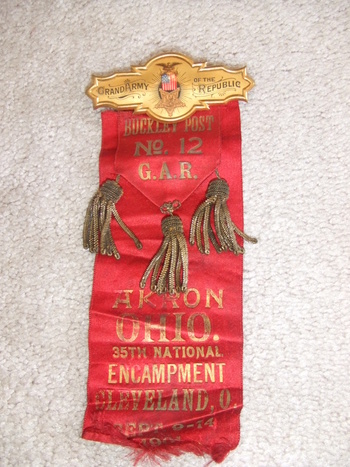 The Grand Army of the Republic was a fraternal organization for Union Civil War Veterans. It was established in 1866 and saw its' heyday in the very late 1800s. The group held annual national reunions and most states and departments held reunions and events at their level. The individual veterans would join a post and attend regular meetings. The group was inolved in politics by lobbying Congress for Veteran benefits and supporting political candidates.

There are a myriad of items available to collectors. A few are shown here:

Photo #1
This depicts two examples of the National Membership Badge. There are several types of these available. Early examples are numbered, but the numbers are not traceable to a particular veteran. I have seen period advertisements that state these were made from captured cannon metal. I do not know if ALL were made that way. Typically these will sell in the $75- $125 range. Parts and pieces are much less desirable. Some unscrupulous ebay sellers will describe the bottom "star" as a fob to attract buyers. While some may have indeed found a second life as a fob, it is only one part of the badge and I would caution collectors in acquiring these. Complete examples are readily available and much more desirable than an incomplete example.
Also in this photo is a GAR cuff button.

Photo #2
This is a printers block for a GAR medal. The medal depicted is an early Medal of Honor Style with the wings upward.

Photo #3
This is a veteran from Ohio wearing his GAR badge and lapel pin. He is wearing a civilian coat, but many veterans are photographed wearing the GAR uniform. These photographs are common and will usually bring less than $25. Of course if the veteran is identified the desirability and price will climb dramatically based on his unit or service.

There are several great books available to collectors. In addition there are several educational as well as sales sites that are useful for researching. I would recommend that potential collectors educate themselves before making a big purchase.