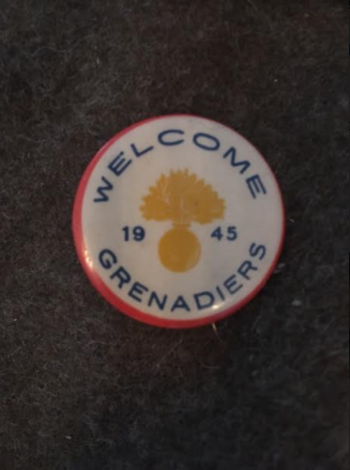 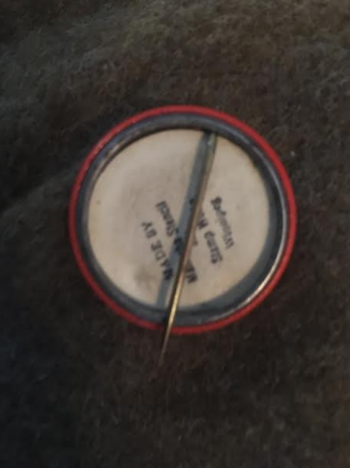 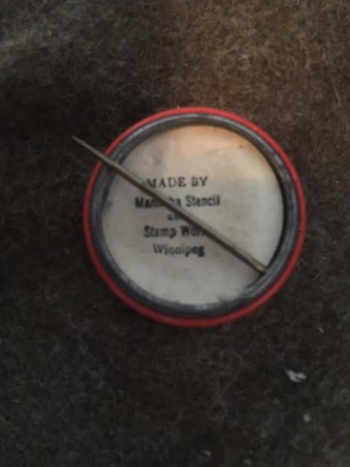 The pin is in beautiful condition for its age and has obviously been well kept. The historical significance of this piece, is it was given to a Winnipeg Grenadier that survived the military disaster at Hong Kong, and years of brutal Japanese torture. When the Grenadiers that survived the horror of war finally came home, they were given these pins as a welcome home token.

In October 1941, the Royal Rifles of Canada and the Winnipeg Grenadiers were ordered to prepare for service in the Pacific. From a national perspective, the choice of battalions was ideal. The Royal Rifles were a bilingual unit from the Quebec City area and, together with the Winnipeg Grenadiers, both battalions represented eastern and western regions of Canada. Command of the Canadian force was assigned to Brigadier J.K. Lawson. This was also a good choice because of Lawson's training and experience; he was a "Permanent Force" officer and had been serving as Director of Military Training in Ottawa. The Canadian contingent was comprised of 1,975 soldiers.

In late 1941, war with Japan was not considered imminent and it was expected that the Canadians would see only garrison (non-combat) duty. Instead, in December, the Japanese military launched a series of attacks on Pearl Harbor, Northern Malaya, the Philippines, Guam, Wake Island and Hong Kong. The Royal Rifles and the Winnipeg Grenadiers would find themselves engulfed in hand-to-hand combat against the Japanese 38th Division.

he Winnipeg Grenadiers had also been thrust swiftly into action with the West Brigade.

On December 18, the Brigade consisted of the Winnipeg Grenadiers, the Royal Scots in reserve in the Wan Chai Gap-Mount Parish area, the Punjab Battalion in Victoria City, and a company of the Middlesex around Leighton Hill.

Charged with covering the southwest and west coasts of the island, the Grenadiers established their headquarters at Wan Chai Gap. Their "D" Company was back in Brigade Reserve at Wong Nei Chong. To be ready for action at a moment's notice, "flying columns" were organized from the Headquarters Company and were billeted just south of Wan Chai Gap.

When the enemy landed on the evening of December 18, the flying columns were ordered forward. Two platoons were directed at Jardine's Lookout and Mount Butler, where they engaged the Japanese in intense fighting. Heavily out-numbered, they were cut to pieces and both platoon commanders were killed.

Early in the morning of the 19th, "A" Company of the Grenadiers was ordered to clear Jardine's Lookout and to push on to Mount Butler. Reports of its action are confused—so many officers and men became casualties—but it apparently became divided and part of the company, led by Company Sergeant-Major (CSM) J.R. Osborn, drove through to Mount Butler and captured the top of the hill. A few hours later, a heavy counter-attack forced this party back where it rejoined the rest of the company. Then, while attempting to withdraw, the whole force was surrounded.

The Japanese began to throw grenades into the defensive positions occupied by "A" Company of the Grenadiers, and CSM Osborn caught several and threw them back. Finally one fell where he could not retrieve it in time. Osborn shouted a warning and threw himself upon the grenade as it exploded, giving his life for his comrades. Shortly afterwards, the Japanese rushed the position and "A" Company's survivors became prisoners. At the end of the War, CSM J.R. Osborn was awarded a posthumous Victoria Cross.

As the Japanese approached the West Brigade Headquarters, Brigadier Lawson decided to withdraw to a new location. However, before the action was completed the headquarters was surrounded. A company of Royal Scots attempted to provide assistance, but less than a dozen were able to get through. About 10 a.m. on December 19, Brigadier Lawson reported to Fortress Headquarters that he was going outside to "fight it out" with the enemy who were firing into the shelter at point-blank range. He left the bunker with a pistol in each hand to take on the massed enemy, losing his life in the effort.

After Brigadier Lawson's death, and that of Colonel Hennessy, who was next in command, West Brigade was without a commander until Colonel H.B. Rose of the Hong Kong Defence Corps was appointed on December 20.

Meanwhile, "D" Company of the Grenadiers held on firmly to its position near Wong Nei Chong Gap, denying the Japanese use of the one main north-south road across the island. The Grenadiers inflicted severe casualties on the enemy and delayed Japanese advances for three days. They held out until the morning of December 22, when ammunition, food and water were exhausted and the Japanese had blown in the steel shutters of the company shelters. Only then did they surrender. Inside were 37 wounded Grenadiers.

The final phase of the fighting on the western part of the island consisted of a brave attempt to maintain a continuous line from Victoria Harbour to the south shore. The Winnipeg Grenadiers were sent to hold Mount Cameron, an important height in the line, and they did so despite intense dive-bombing and mortar attacks. On the night of December 22, they were forced to retreat as the Japanese once again struck in the darkness.

Now the line consisted of the Middlesex Regiment and the Indian battalions on the left, the Royal Scots on the western slopes of Mount Cameron, and the Grenadiers in the right sector to Bennet's Hill. On the afternoon of December 24, the left sector fell and the enemy made further gains on Mount Cameron. The Grenadiers held their positions against heavy attacks and on Christmas morning regained some ground lost at Bennet's Hill.

However, after a three-hour truce the Japanese again attacked. The Allied positions were overrun and the defenders were forced to surrender.

At 3:15 p.m. Christmas Day, General Maltby advised the Governor that further resistance was futile. The white flag was hoisted. On the east side of the island, a company was just moving forward for an attack when word of the surrender arrived.

After seventeen and a half days of fighting, the defence of Hong Kong was over. The battle-toughened Japanese were backed by a heavy arsenal of artillery, total air domination, and the comfort of knowing that reinforcements were available. In contrast, the defending Allies, with only non-combative garrison experience, were exhausted from continual bombardment, and had fought without relief or reinforcement.

The fact that it took the Japanese until Christmas Day to force surrender is a testimony to the brave resistance of the Canadian and other defending troops.

The fighting in Hong Kong ended with immense Canadian casualties: 290 killed and 493 wounded. The death toll and hardship did not end with surrender.

Even before the battle had officially ended, Canadians would endure great hardships at the hands of their Japanese captors. On December 24, the Japanese overran a makeshift hospital in Hong Kong, assaulting and murdering nurses and bayoneting wounded Canadian soldiers in their beds. After the colony surrendered, the cruelty would continue. For more than three and a half years, the Canadian POWs were imprisoned in Hong Kong and Japan in the foulest of conditions and had to endure brutal treatment and near-starvation. In the filthy, primitive POW quarters in Northern Japan, they would often work 12 hours a day in mines or on the docks in the cold, subsisting on rations of 800 calories a day. Many did not survive. In all, more than 550 of the 1,975 Canadians who sailed from Vancouver in October 1941 never returned.

Once the war was over, and the Japanese defeated, this pin was given to a survivor of this battle and years of unimaginable treatment in POW camps, once the surviving Grenadiers finally reached home and their families.