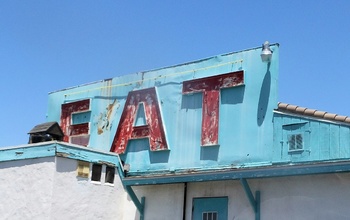 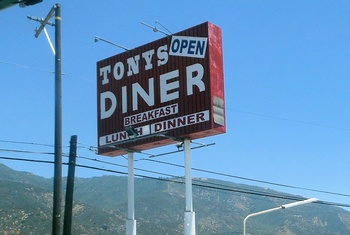 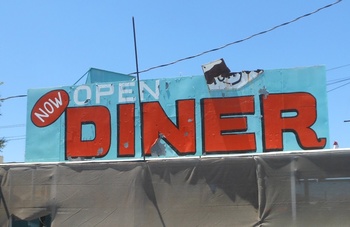 This is the stretch of Route 66 closest to me but I had not visited it before. When I leave the mountain I either go down the 18 going south or take to the 138 to go north to the high desert. This time I took the 138 and instead of heading north I went south to see this little stretch of Route 66 I have not yet visited.
Both of these places are still open and doing well despite their rather old looking signs. Currently they are at the 15/215 split but in the Route 66 years they were on Route 66. Now they are on a cul de sac just off the original Route 66.
The "EAT" sign can be seen from Route 66. The other signs can be seen from the 215.
Tony's Diner isn't five star food but it isn't meant to be. It's diner food and not a trendy gastropub.
Did not go into the Screaming Chicken but it is said to be a dive bar that isn't quite a dive bar due to the Route 66 tourism. I'll have to stop there and have a beer some day.
Click on Photo 4 to see the chicken.