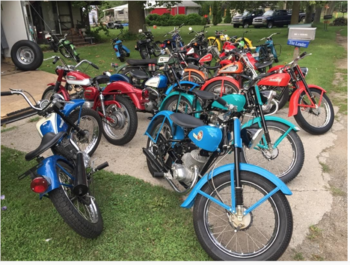 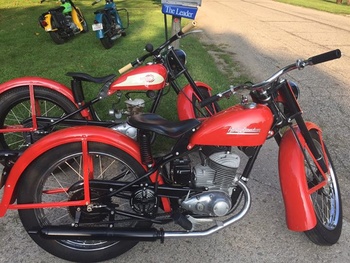 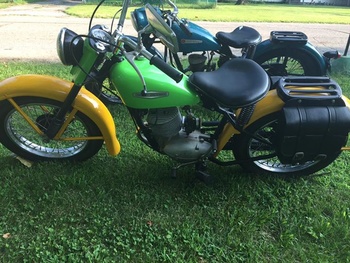 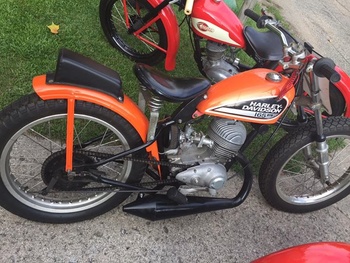 Pretty sweet collection of mid 1950-60's Harley Davidson Hummers in a variety of colors. These were collected from all over the USA!

The term "Harley Hummer", loosely refers to all antique, Harley Davidson, American made, 2 cycle , vintage, lightweight motorcycles produced between 1948 and 1966 at the Milwaukee, Wisconsin factory. However, technically speaking , the true "Harley Hummer" was only produced from 1955 until 1959, and it was a very basic, stripped down, no frills, 125cc motorcycle. It all began in 1948, when Harley-Davidson released the "Model 125" , a small , sturdy , light weight , two-stroke motorcycle, of 125 cc displacement. The Model 125's design, was actually a result of the German motorcycle manufacturer DKW , whose engineering designs were forfeited to the allies, as a result of World War 2 reparations , at the conclusion of World War II. Other manufactures also benefited from DKW's slightly altered designs, including BSA, with their Bantam model, and Yamaha with their YS-1. Today, the term "Hummer", also seems to incorrectly include the Harley Scat, Harley Pacer, Harley Ranger, Harley Super 10, Harley 125 , and Harley 165, although the two stoke Harley Topper is excluded. In 1948, Harley introduced the Model 125. Its engine was of two stroke design, which meant the operator had to mix oil, with the gasoline. This was a first for Harley! Failure to properly mix the oil with the gas, was sure to cause engine failure! It produced 3 horsepower, and featured a girder-type front end ,with a front suspension that consisted of large rubber bands. It was touted by Harley, to get 90 miles per gallon of gasoline! Due to its low, initial price, and its economical price to operate, the 125 cc was a very popular choice, with many groups, including paper boys, farmers, beginners, and even veterans returning home, after the war, who had limited income! It was a popular addition, to the 1948 Harley model line-up! In 1951, the rubber band front end , was replaced by a more conventional hydraulic unit, which Harley called the "Tele-Glide". This was designed after the more popular, traditional , Harley "Hydra-glide" front suspension. In 1953, the "Model 165" emerged, as a replacement for the Model 125. The larger engine size , 165 cc , boosted horsepower to 5.5 ! A much needed update! In addition, 1953 also marked Harley's 50th year in business! To celebrate this event, a special brass medallion was designed, and would grace the front fenders of all 1954 models, including the Hummer. Sales of the small Hummer, were beginning to slow down, although V-twin sales were still strong! By 1955, Harley Davidson was beginning to feel the pressure of the Japanese motorcycle invasion. Jap dealers , such as Honda and Yamaha , were beginning to invade the American market, and the jap dealerships were able to offer much more reliable machines, at lower prices! Harley was hurting! So, in 1955, with the help of a company employee, by the name of Dean Hummer, Harley introduced the TRUE "Harley Hummer". An American made motorcycle, that was stripped down to its bare essentials, in hopes of competing against its rising foreign competition. The new hummer model lacked a battery, opted for a magneto ignition, and had no electronic horn , no turn signals, and no brake light system! Harley was simply stripping the model down to its bare essentials, and thus lowering the price, in hopes of competing with the foreign motorcycle market! Despite its lower price, sales continued to lag. Even a properly tuned Harley Davidson Hummer, could not compete against the Japanese made machines! Sales of the Harley lightweight, began to suffer, ....SEVERELY! Harley was clearly loosing the battle, as the Japanese motorcycles were much more dependable, offered a better suspension, and required very little, if any maintenance, and were much faster! The Hummer remained in production during 1956, 1957, 1958, however, it was dropped after 1959. In 1960, the Harley Super-10 emerged, replacing both the HUMMER and MODEL 165. The model sported a newly designed 165 cc engine, but sales still continued to suffer. A little motorcycle called the Honda Dream, was everywhere! The Super 10 was discontinued in 1961. A new, 175cc engine, was introduced in 1962. 3 models were offered in 1962...The Harley Ranger (165cc left-overs), Harley Pacer (175cc), and Harley Scat (175cc). 1962 also marked the end of the hard-tail frame, as big changes were in store! A totally new frame was introduced in 1963. H.D. called it the "Glide-Ride" . This new style frame utilized a dual, spring dampening, rear suspension. This was a welcomed change, however sales continued to lag. The Ranger was dropped from the 1963 line-up, leaving only the Harley Pacer and Harley Scat , both of which remained relatively unchanged, for 1964 and 1965. In 1966, only 1 American lightweight model was produced .... The Harley Bobcat. It sported a unique, one-piece, ABS body, similar to the one used on the Superglide, a few years later. Very modern for its time! Unfortunately, the Bobcat was dropped after only 1 year of service, thus ending the era, of the lightweight, American made, Harley "Hummer". By 1967, Harley was hard-pressed to compete with the Japanese light-weight invasion. Harley Davidson had acquired the Italian Aermacchi division ( Sprint 250 and 350 ), and the decision was made to shift small bike production to Italy, thus ending the 19 year old legacy, of the American made, "Harley Hummer". Today, owning a Harley Hummer (not hummer h3) can still be a very fun and rewarding experience! Words can not explain the sensation, of holding the throttle wide open, watching the speedometer slowly reach a top speed of maybe 45 miles per hour, and being followed by a thick, jet stream cloud, of 2 stroke smoke! Thanks to WWW.Harley125.com for info 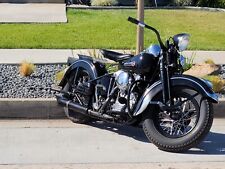